“We need to see how things are interconnected so we can value them and protect them.”
-Eldon Tam, Former Project Manager at The Burke Museum 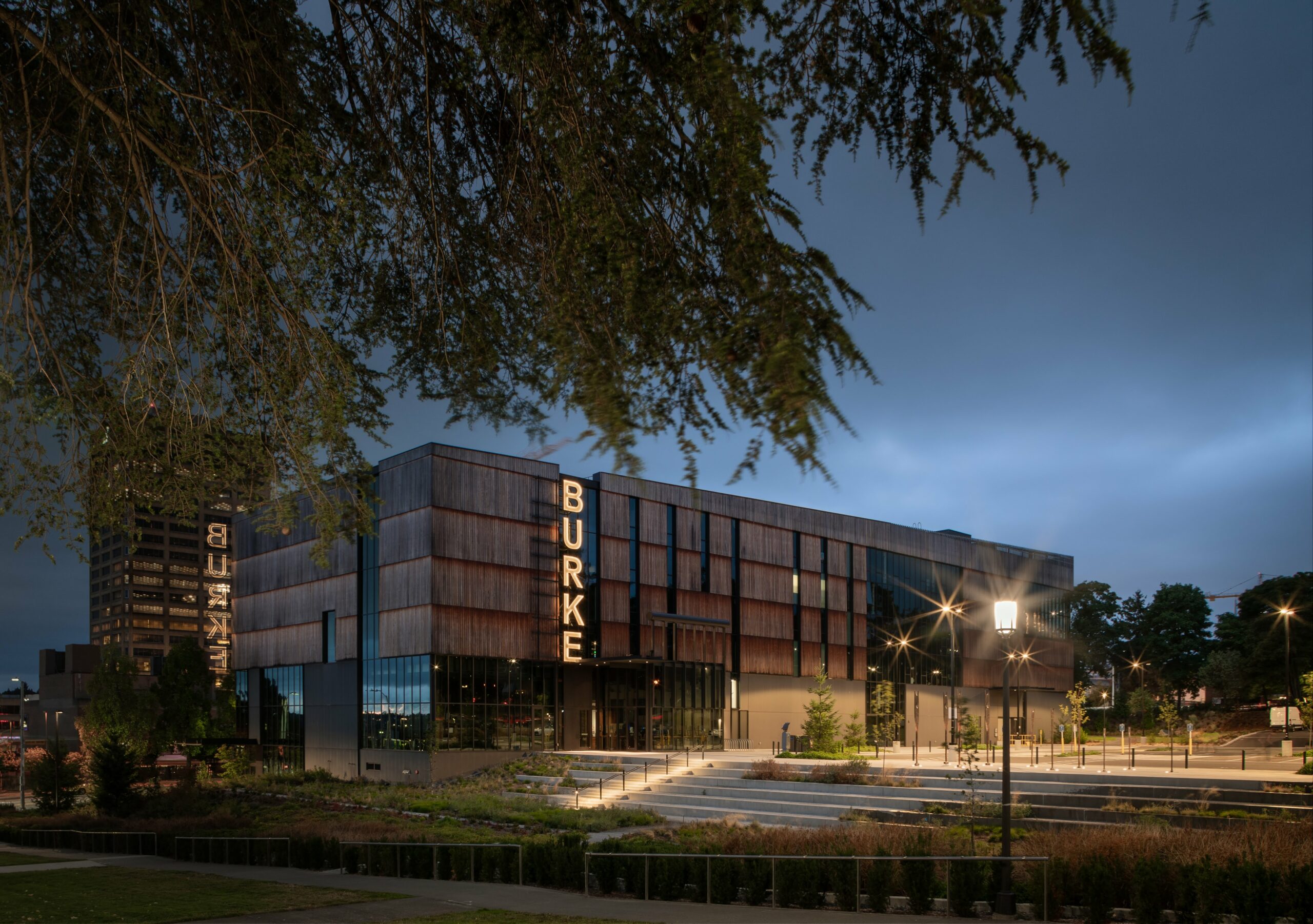 The Burke Museum of Natural History and Culture is a landmark on the University of Washington campus and in the city of Seattle. Founded over 130 years ago, the museum includes public exhibits and features active scientific research. Today, The Burke Museum has one of the foremost collections of Native American artifacts of the pacific northwest.

“Behind the scenes there was active research happening every single day, new discoveries being made, but you would never know that because there was concrete and brick walls separating the general public from all that work.”
-Eldon Tam

Despite having incredible collections of artifacts, The Burke Museum has not always been designed in a way where the public could interact with them. The gallery exhibits were dated, many of the collections were in storage, and walls separated the public from all the fascinating research happening daily at the museum. When deciding on a design for an updated Burke Museum, creating a space where people could interact with the artifacts and research was at the forefront.

Seattle-based architecture firm Olson Kundig was selected for the task of designing the new museum, and they were the perfect ones for the job. Principal and owner Tom Kundig is an alumnus of the University of Washington who has fond memories of The Burke Museum from his time as a student. At first, the design team considered repurposing and adding onto the current museum space, but they determined the existing structure was just too limiting in terms of how visitors could potentially experience the museum. This led to the decision to build an entirely new Burke Museum.

The vision for the new building’s design was sparked by a fundraising event the museum held each year. The Curator’s Dinner was a night where people were able to tour the basement and storage areas and interact closely with the artifacts kept behind the scenes. With a basement that was more interesting than the museum itself, the design team realized the best course of action was to flip the museum inside out, bringing out all the artifacts kept in storage and putting them on display. Instead of traditional exhibits, visitors would be able to walk through the museum looking at the collections and watching scientists work with the artifacts.

“We didn’t really have a roadmap to figure out where we were going. Just like the way science works, science works with failures defining successes. We were able to find a few failures to then understand that that was not a direction to go.”
-Tom Kundig, Principal/Owner at Olson Kundig

When designing The Burke Museum, the team faced many challenges. They were in uncharted territory, as to their knowledge, a museum showing working scientists had never been done successfully on this scale. The curators and the public would be sharing space, and some of the scientists were concerned they might feel like they were in a fishbowl or have people constantly knocking on the glass. To ensure a comfortable working environment for them as well as an interactive experience for visitors, temporary visible labs were configured at the former museum. This removed pressure from the scientists since it provided the opportunity for trial and error, and for the setup to be rearranged if needed. Through this experimental period, the design team learned what worked best and what did not. The end result included the use of white boards outside the labs rather than reader rails, so scientists could express what they were working on daily and visitors could see how their work changes constantly. 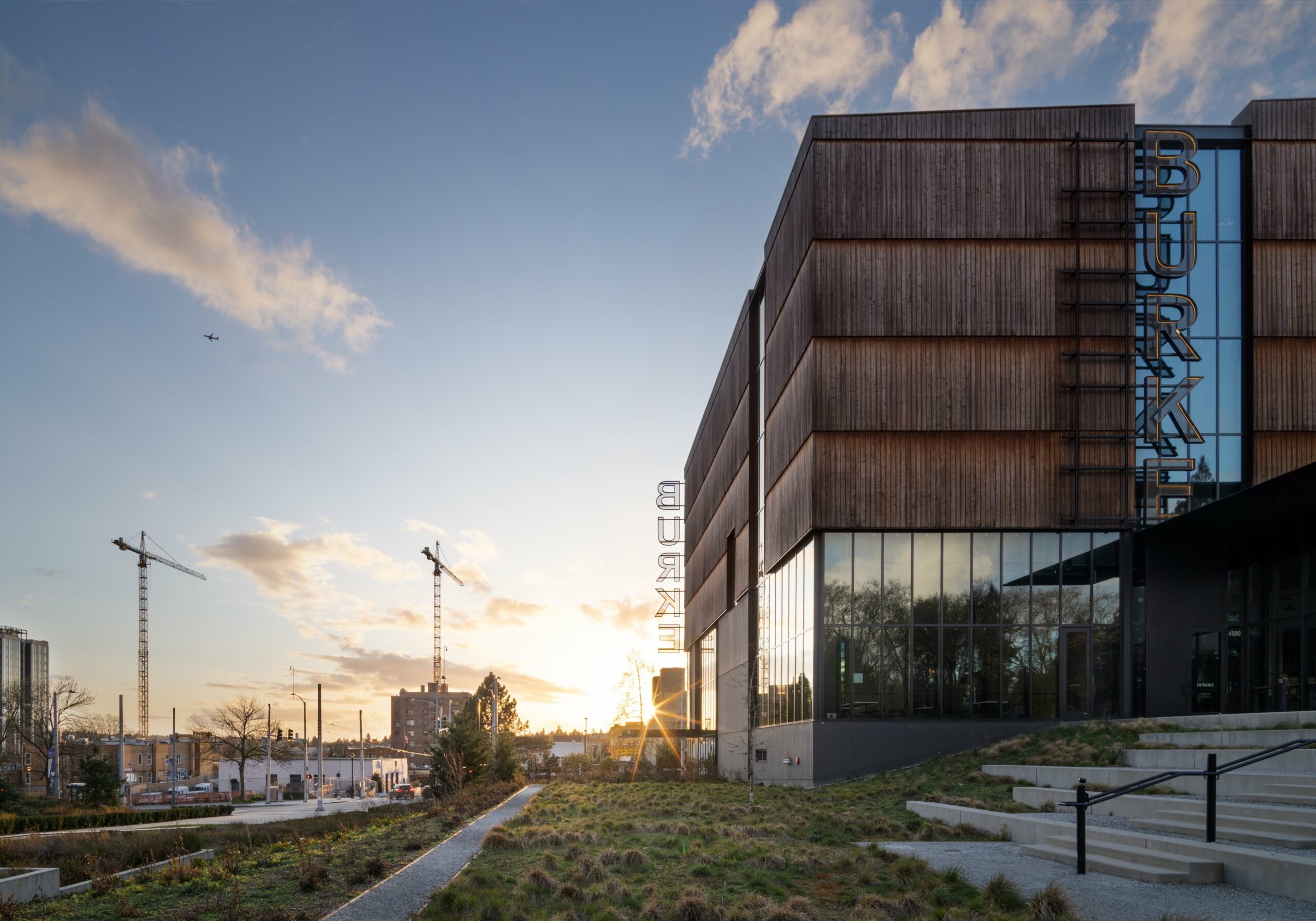 The team also encountered a funding complication during the construction of the new Burke Museum. A round of funding was delayed due to a legislation session that ran over the normal period, leaving the project with a 3 month gap in funding. The team at Skanska decided to prioritize closing the building off from the elements prior to pausing. To keep the exterior cladding installation going, the team at Sessler used a smaller crew so that the Kebony wood could be installed at one time. This ensured it would weather more evenly. Even with this significant obstacle, no ground was lost while waiting for the next round of funding to come through due to these creative solutions.

“One of the things I didn’t account for was how sensitive the existing museum was with the artifacts inside.”
-Vince Phillips, Senior Superintendent at Skanska

Another challenge faced by the team was scheduling the construction plans, when the former museum needed to remain open during construction and over 18 million artifacts would have to be moved when the new space was completed. The Burke Museum’s general contractor, Skanska, created a plan that divided the build into three phases: building the new building, moving in and assembling exhibits in the new space, and then demolishing the old building. This plan required a series of strategic moves, beginning with building the new museum on the site adjacent to the old one for easy access to the artifacts. They then had to carefully move all the artifacts into the new building, including maneuvering one of only 7 T-Rex skulls in the world safely into the space. Demolishing the former museum proved to be difficult as well, because the artifacts were sensitive and the vibrations caused by the demolition could damage them. Skanska set up a vibration system that was checked daily until all phases of the build were complete to ensure the safety of the artifacts.

The placements of the exhibits in The Burke Museum were thoughtful and purposeful. With the guidance of Evidence Design, the team considered each aspect of the visitor experience, including what would propel a guest to visit the second and third floors of the museum. They decided to place the most exciting exhibits at the top of the museum, so people can walk through all the other exhibits and experience things they didn’t expect to see on the way to what they want to see most. A staircase that bifurcates the structure aids in this capacity as well, as visitors can see collections they might want to take a closer look at while they walk up the stairs to the next floor. In addition, a large glass window allows guests to see the dinosaur exhibit all the way from the parking lot, so they get a glimpse of what they want to see before they even enter the museum. The Burke Museum design team made every effort to ensure a more transparent and immersive guest experience than what was possible at the former museum, and the result is an example of true collaboration between exhibition designers and architects. 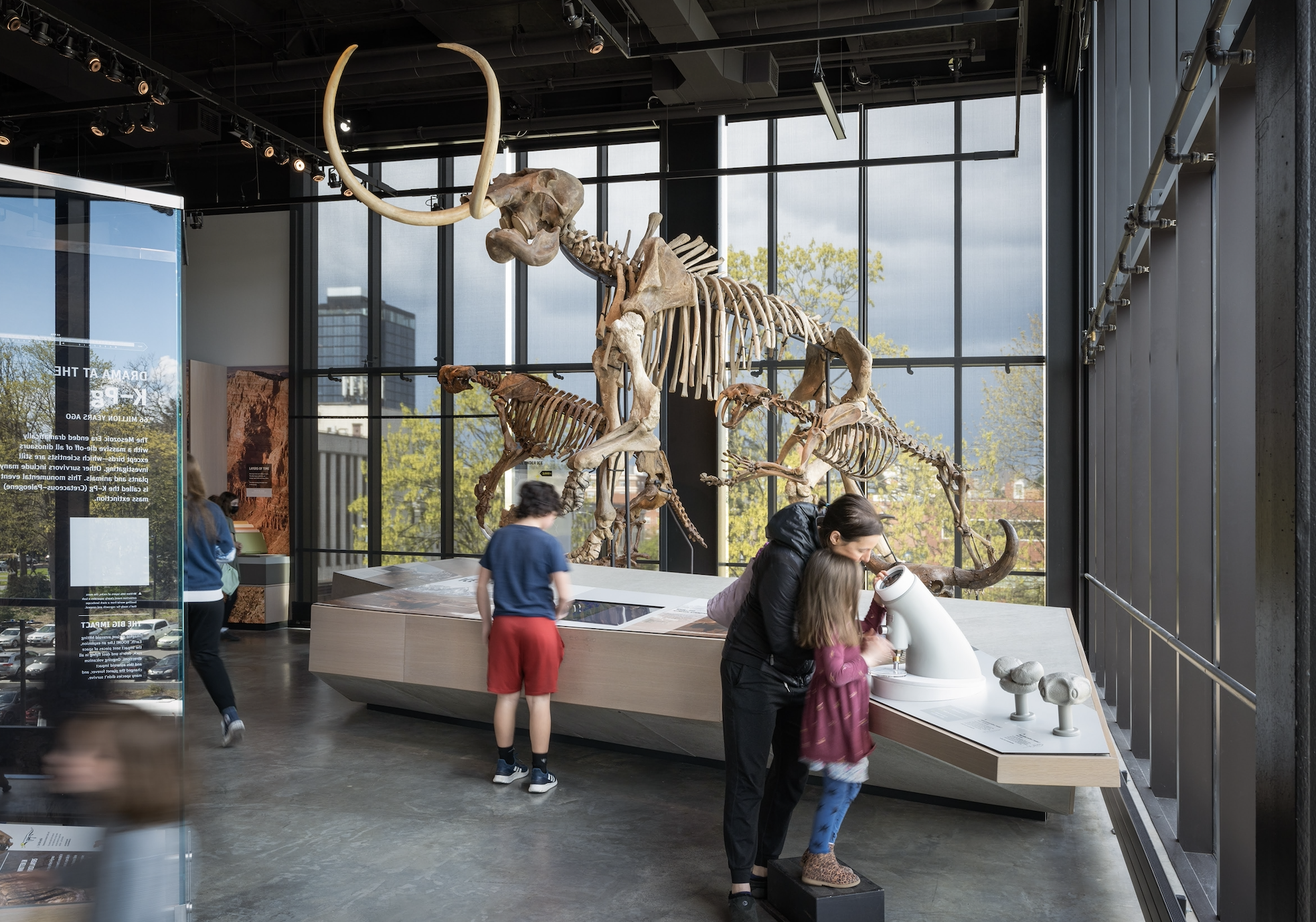 “Wood is a material that shows time.”
-Tom Kundig

One of the most unique design choices was the selection of Kebony modified wood for the exterior of The Burke Museum. With no stain or finish, Kebony wood ages naturally with time into a silver-gray patina. The design team liked the idea that a natural history museum would age naturally, and the design was met favorably by the Washington University Architectural Commission and the native tribes to the area. Most of the buildings at the University of Washington are brick, so the wood cladding of The Burke Museum sets it apart on campus.

Another exciting feature included in the design of The Burke Museum is the gizmo door. This liftgate door requires human energy to operate. As people turn the wheel to move the wall, they become part of the natural world. Designing a museum where visitors could truly experience the collections of artifacts and interact with the space was a priority for the design team, and that is reflected in many ways, including with the addition of this door. 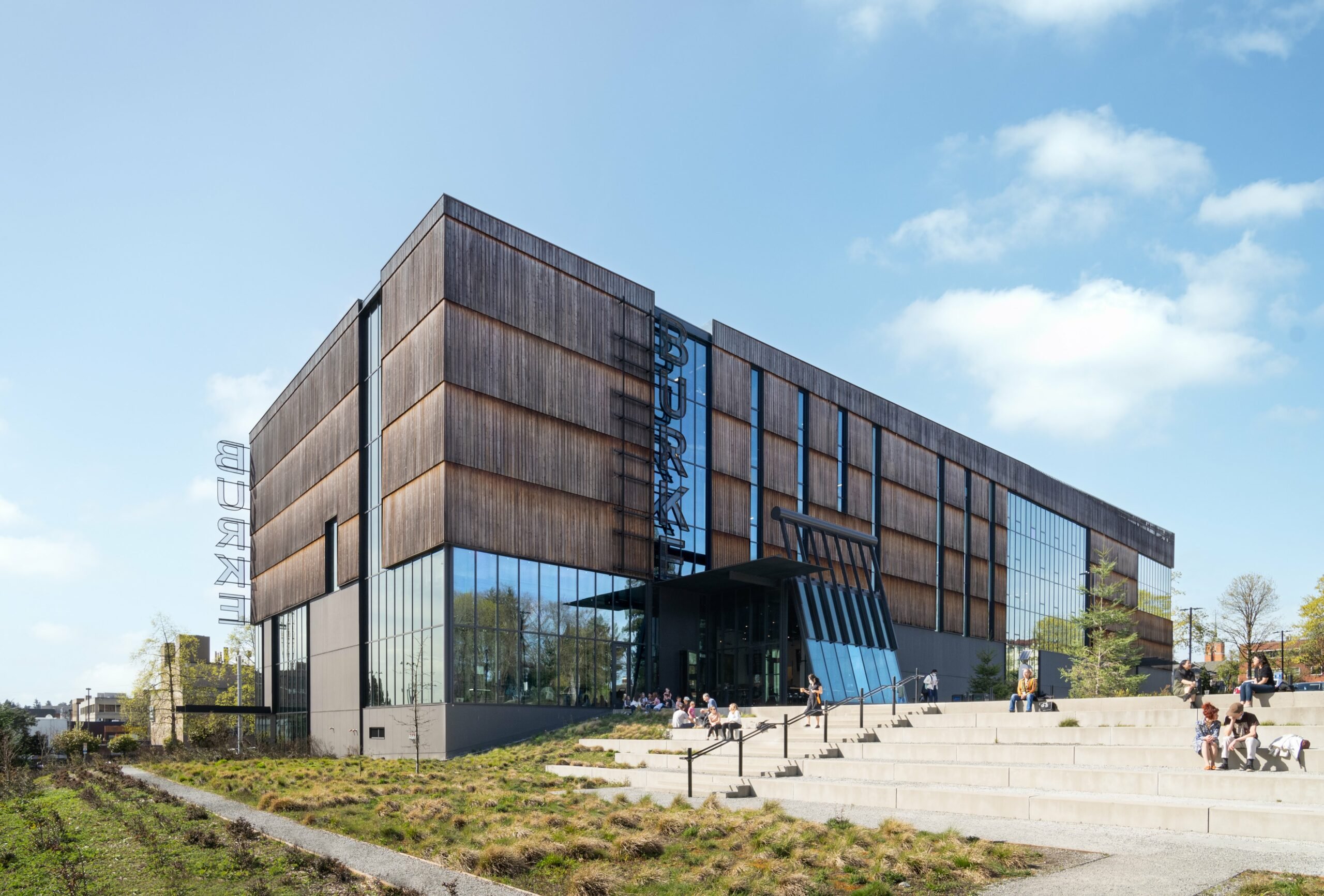 “We delivered something to the community that makes the community a better place.”
-Troy Stahlecker, The University of Washington

The Burke Museum design team took a major risk when making the decision to turn the museum “inside out”. Providing guests with the opportunity to fully experience the collections of artifacts and learn what scientists are working on in real-time provided its challenges. Ultimately, the risk was well worth the reward as people have begun to visit the space and be immersed in natural history and culture in a way they were not able to before. The Burke Museum is a pillar in the community, and allowing visitors to see closely how things are interconnected helps them to value the natural world and will hopefully inspire them to protect it. 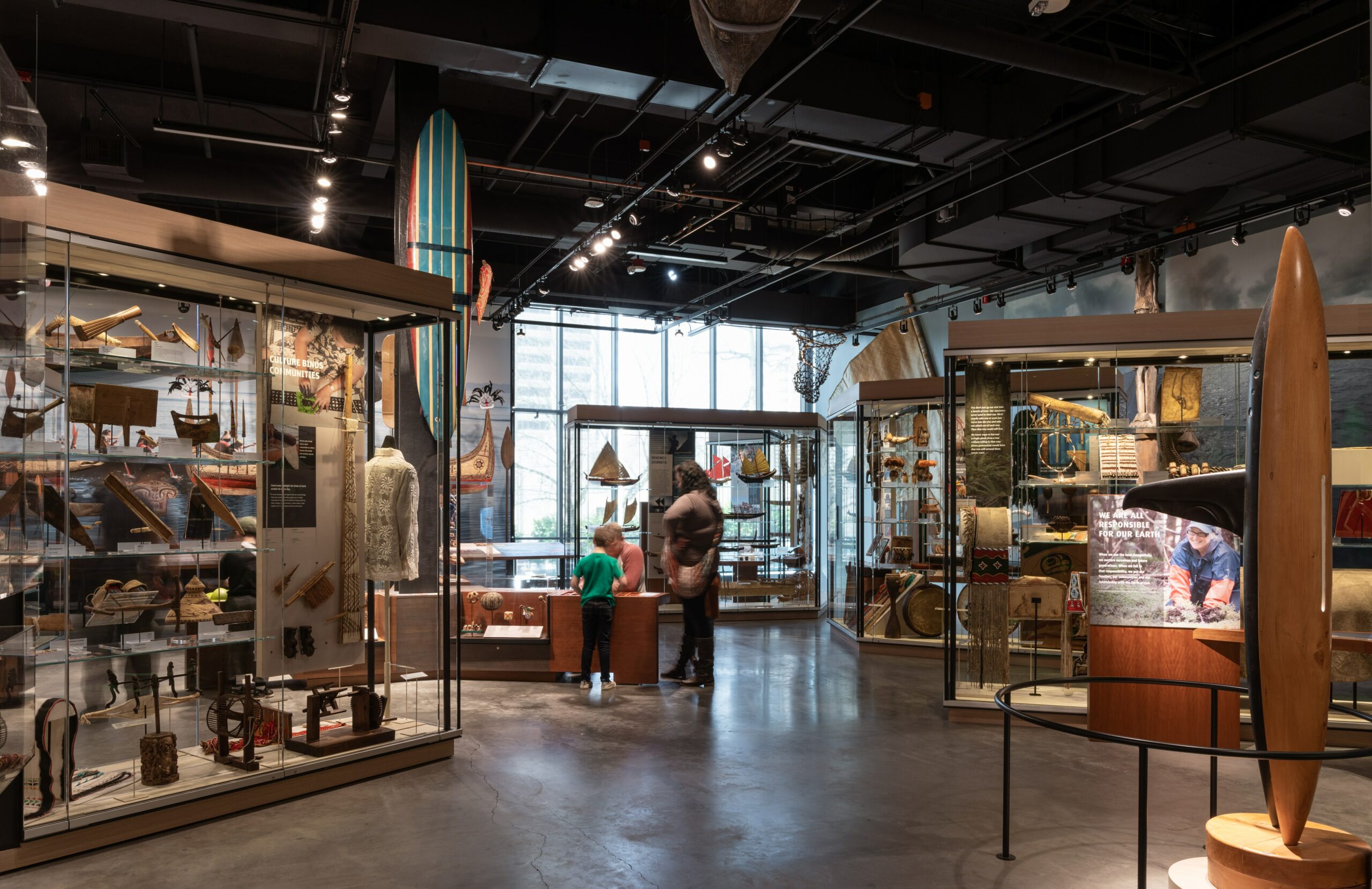