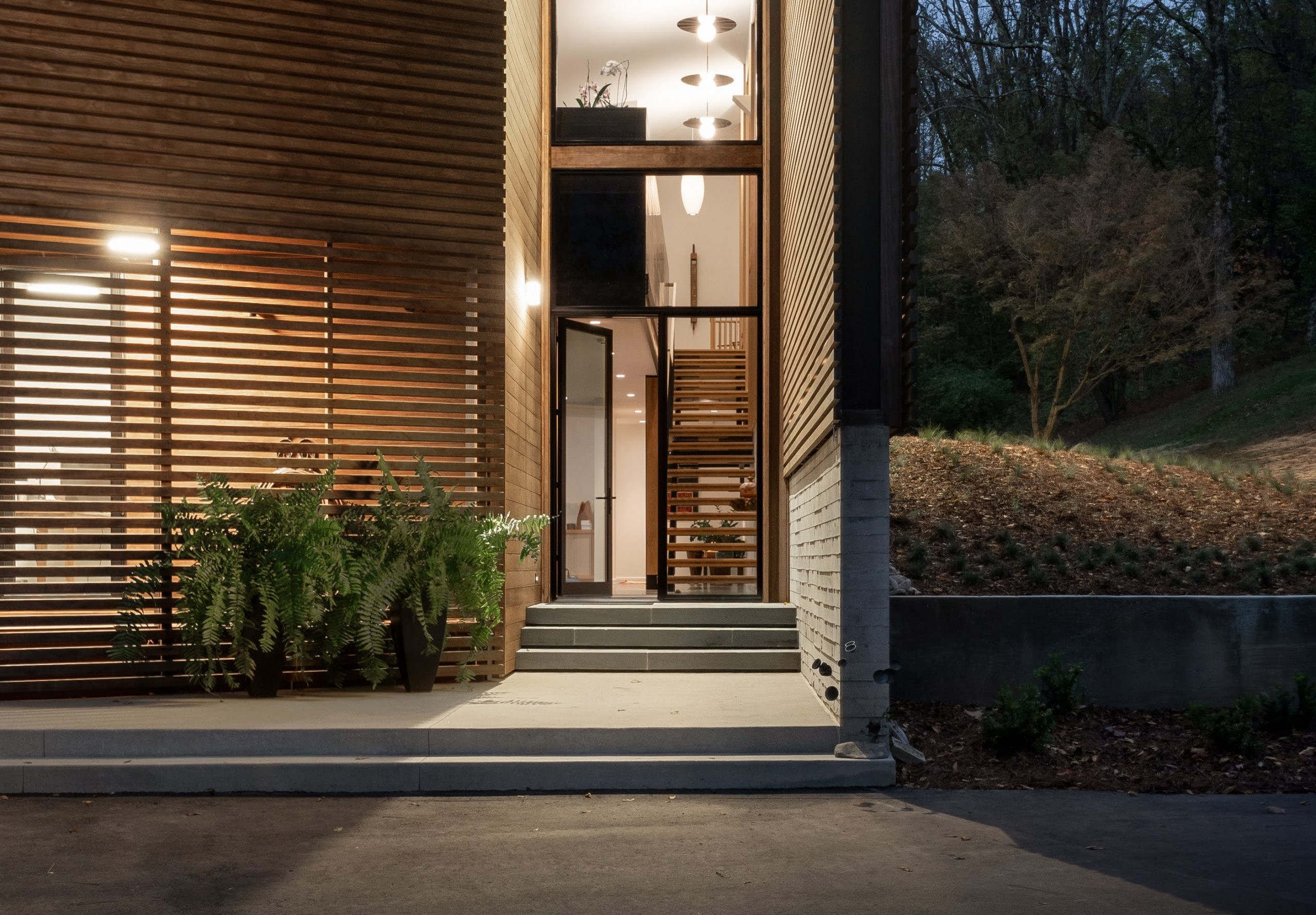 “We kind of felt like we needed an ‘our place’.”
– Mary DiVittorio, Owner of Wood Screen House

Mary DiVittorio and Dan Grecco married in 2017, and quickly began looking for the right home for this new chapter of their lives. Mary owned a 1975 Tudor-style house and Dan had a house closer to the city, but they wanted to find a place that was “theirs” together. After looking for over a year without results, they ultimately decided the lot at Mary’s house could be used as the site for their custom-built dream home. Mary had been collecting pictures and magazines for years, and had many ideas for their new space. Her magazines led her to enlist highly-regarded Nashville architect Michael Goorevich to spearhead the project. 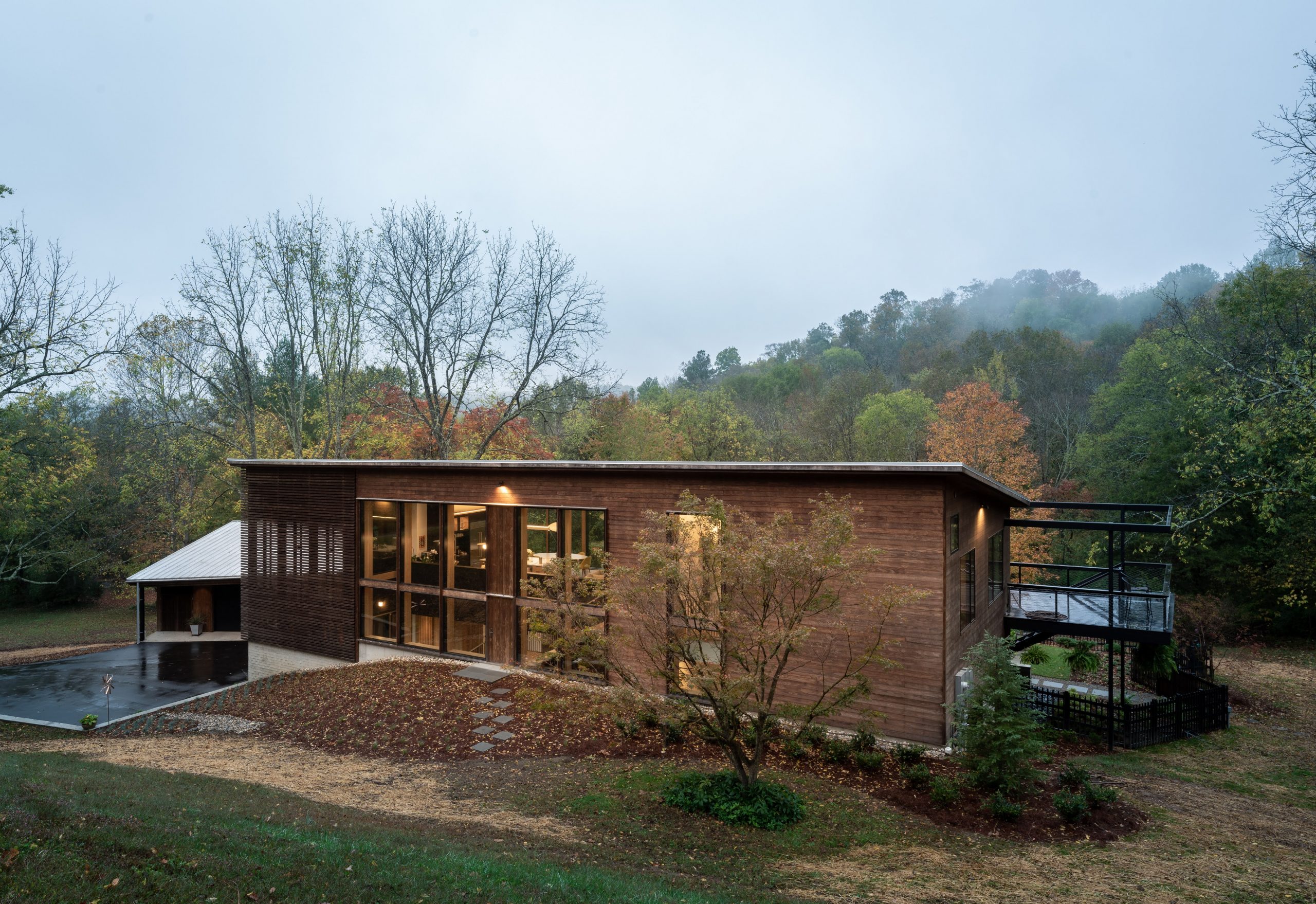 “I’m more interested in going back to the frontier Nashville.”
– Michael Goorevich

Goorevich, originally from upstate New York, moved to Nashville with the determination of answering the question: ​​What is authentic Tennessee architecture? Drawing inspiration from the log cabins of the Tennessee frontier, Goorevich has succeeded in creating a modern aesthetic with his projects that pays homage to Nashville’s roots.This aesthetic is what drew Mary and Dan to his work when they were looking for someone to help them create a home that was uniquely connected to its surrounding landscape. 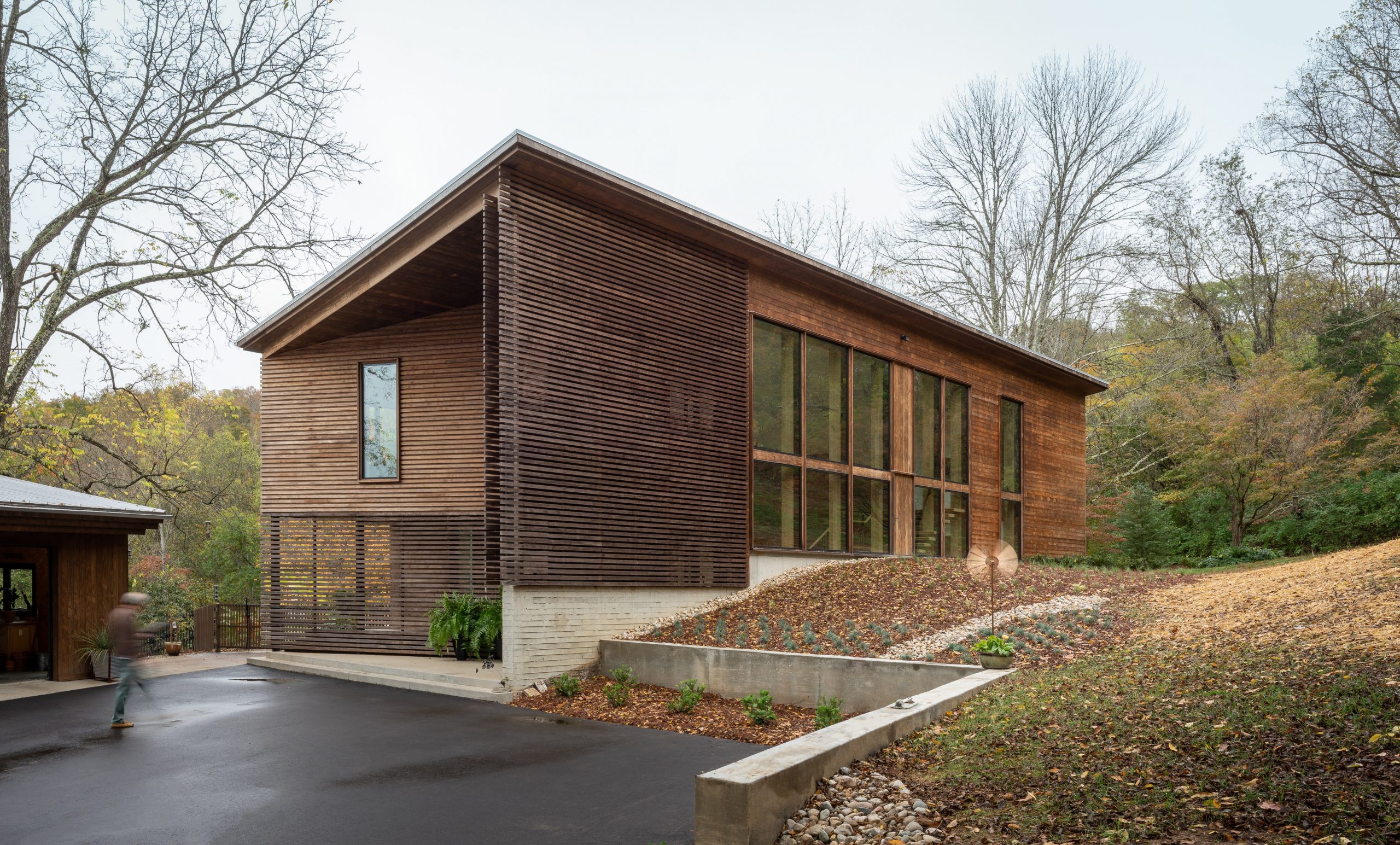 Mary and Dan had a clear vision for their home, and Goorevich helped them turn their vision into a reality. They wanted their house to experience the changing of the seasons, and this influenced many design decisions. Their ideal design was a fully glass house, which led to the creation of an open floor plan with floor-to-ceiling windows so that natural light could pour in all day from all directions. While the final product turned out to be absolutely stunning in every aspect and down to every small detail, achieving this unique and incredible work of architecture was not without its challenges. 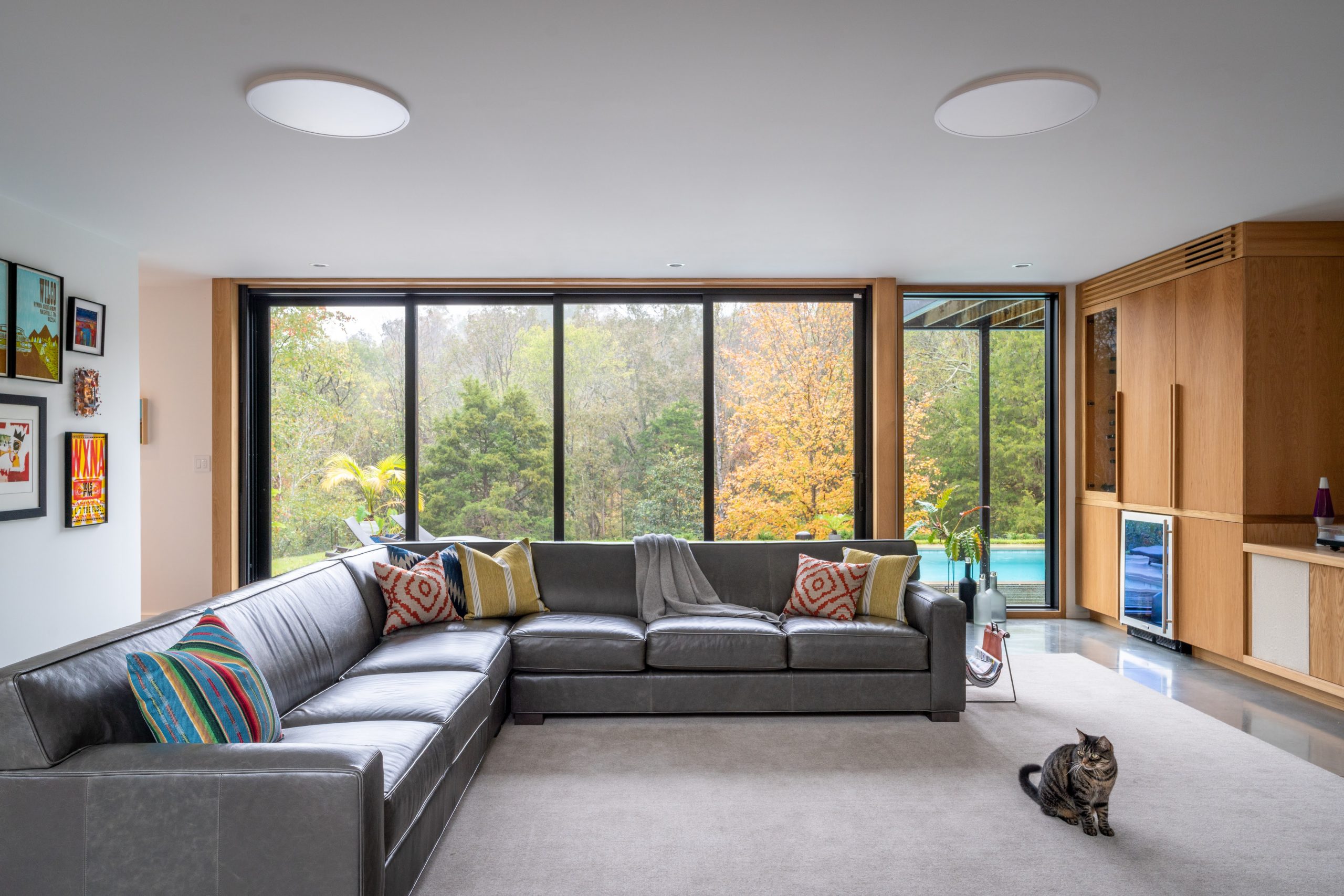 Goorevich’s reveal of the first iteration of Wood Screen House did not go as he had planned. When he met with Dan and Mary to show them what he had designed, he brought a model with him. Dan and Mary did not even realize it was their house when they first saw it, and Goorevich could see instantly that this design was not what they were looking for. After hearing Dan and Mary’s concerns with the first house, he understood he needed to go in a different direction to create the kind of space they were picturing. He realized Mary wanted to be able to live in her new space in the same way she lived in the previous Tudor house. This led him to create a new design with a similar orientation to her old home, and it was a success. Dan and Mary were an essential part of the design team, and they met with Goorevich frequently for work sessions. This close working relationship was a key factor in overcoming the many obstacles that inevitably arose while completing the project.

“The staircase is a piece of art on its own.”
-Worcester Bryan, Bryan Contractors

Possibly the greatest challenge was the design and construction of the floating staircase and second floor. The staircase was a central idea behind the project, and finding a way to incorporate it was a true engineering marvel. Due to the wall of windows along the front of the house, the second floor could only be achieved with the installation of a large supporting column in the center of the first floor. This single column was also the solution that allowed for the floating staircase. Worcester Bryan of Bryan Contractors, who was the builder on the project, explained how designing the staircase was an exacting task, because the landing had to perfectly match the threshold of the front door and the spacing between the treads had to be equidistant. The white oak stairs running along the glass wall are mounted with steel plates, and are fully supported by the column. 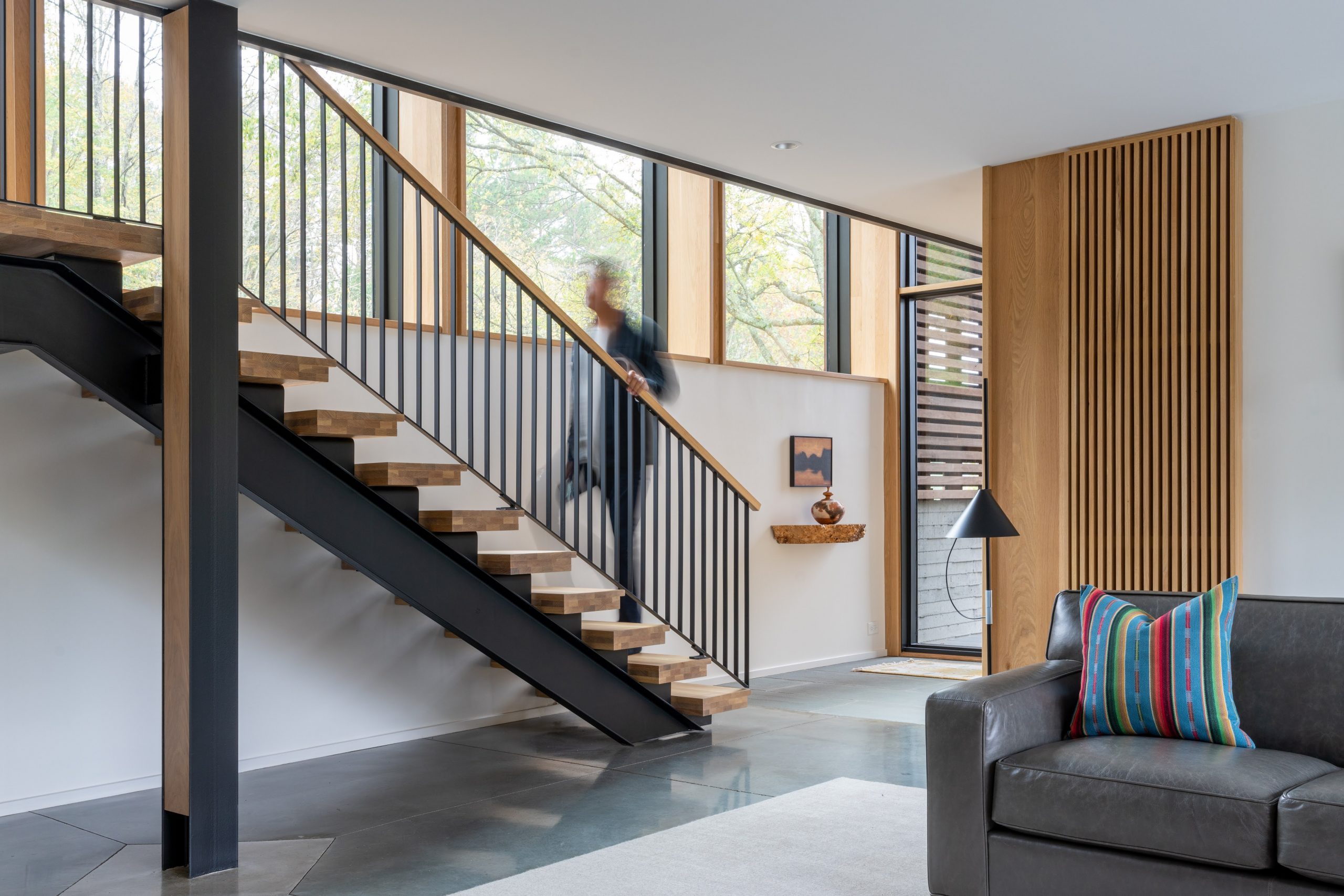 “When I really started to appreciate what Michael had designed was when I started coming to the house at different times of the day…and seeing what he was really trying to do with casting the shadows. He absolutely nailed it.”
-Worcester Bryan 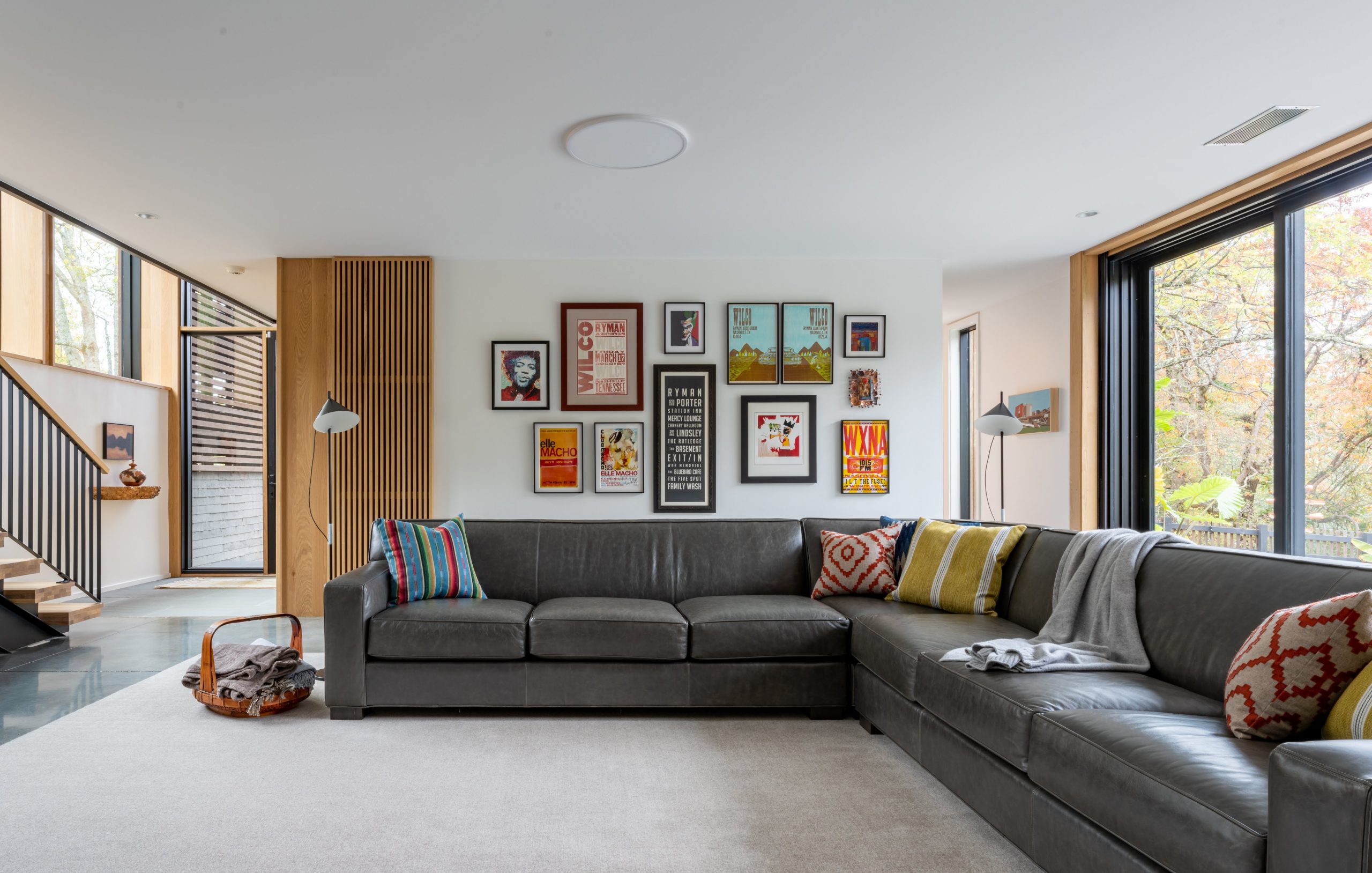 In addition to the phenomenal floating second floor and staircase, Wood Screen House boasts many other exciting and dynamic features. The screens themselves that form the exterior of the home serve multiple purposes. Fabricated from Kebony modified wood, the slats simultaneously conceal and reveal. Transparency and connection to the landscape were at the forefront of the design of the house, and the screens allow for that while also helping to mitigate the afternoon sun pouring into the kitchen. Wooden slats were incorporated into the interior design of the home as well, providing consistency within and without and solving pragmatic problems such as hiding return air vents.

“No matter where you go in the house, there’s something extraordinarily interesting to look at.”
-Mary DiVittorio

Roger Gramm of Just Plane Wood was an integral part of the design team from the very beginning, providing intricate custom millwork all throughout the house. He crafted cabinets, the downstairs bar, the vanities, and most notably, the “hidden” front door. The original design of the house did not include a door on the street-facing side of the house, but one was added so that Mary could walk out and work in her garden. Mary and Dan did not want it to look like the house had a front door, so the idea emerged for a hidden front door that was camouflaged with the exterior cladding. This concealed door helped to maintain the integrity of the design, while also allowing Mary access to her garden. 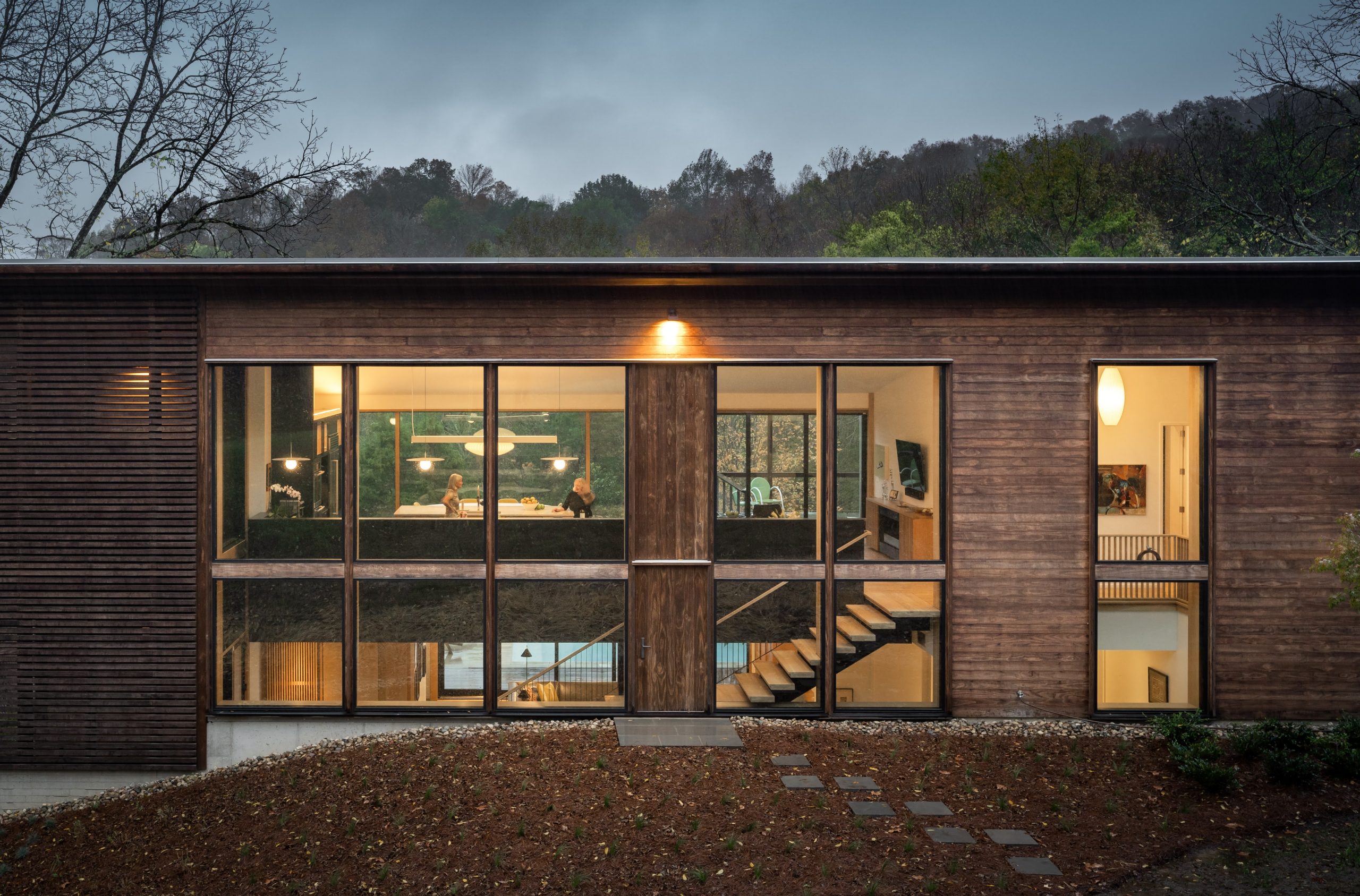 “The landscape was always the most important thing about this house.”
-Michael Goorevich

Every detail of Wood Screen House reflects how Mary and Dan live in their space on a daily basis. Mary’s gardening and the couple’s desire for connection to their surroundings were at the heart of each decision made when designing the house. Gardening is Mary’s life’s work, so the landscape was an important part of the new home’s design for her. She had always done the gardening by herself, but she knew she needed help carrying out her vision for the new space. She needed a starting point that she could build from and work on forever, and landscape designer Sari Barton worked with her to create exactly that.

“The history of what was here before will continue to flourish in different ways.”
-Sari Barton, Wood Screen House Landscape Designer 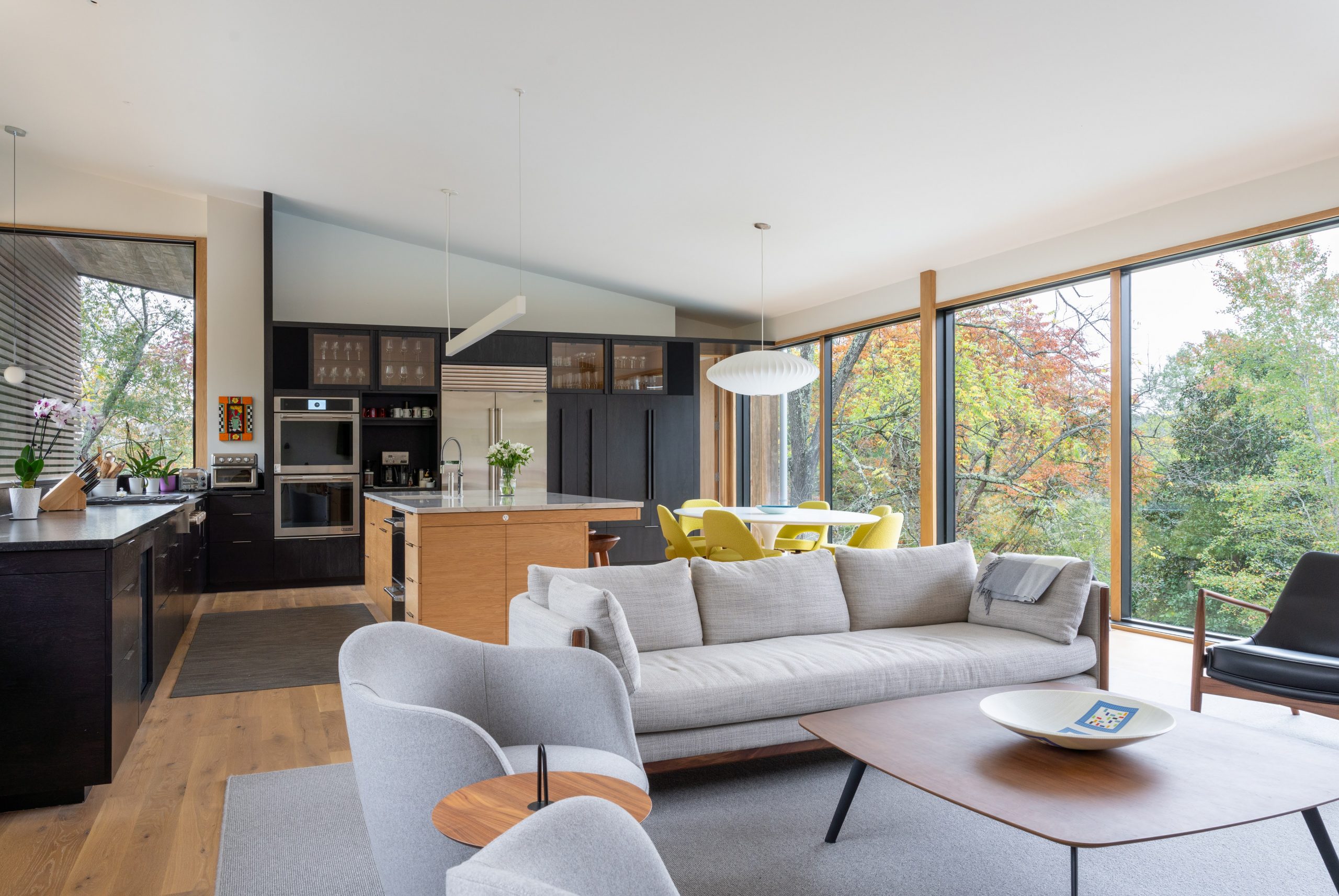 Mary has begun adding her own touch to the original landscape design, and will continue to add to its beauty for years to come. It is inspiring when a beautiful work of architecture becomes even more remarkable when inhabited, and it is evident that this is what has been achieved with Wood Screen House.