Creating a Blank Canvas for a Living Work of Art: The Fulshear House

“A living work of art…I think that’s what we have here.” 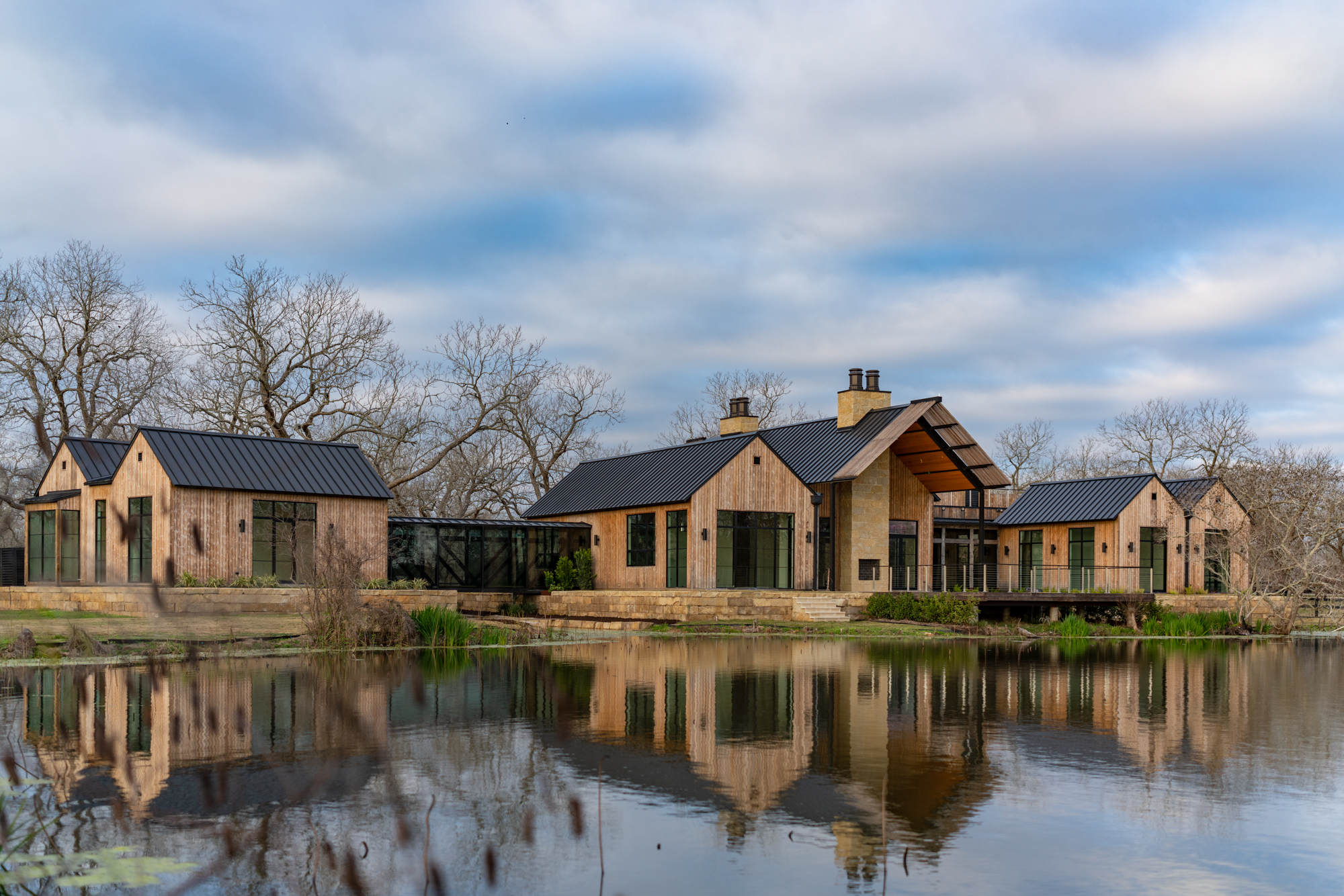 David Wersebe’s family has owned their ranch in Fulshear, Texas since his grandfather fell in love with the land in the 1920’s. The ranch became known for its rows of pecan trees that were fruitful for years. When the trees no longer produced nuts, it was time for Wersebe to decide what the future of the land would hold. The land is adjacent to polo fields, which are part of Fulshear’s prominent equestrian culture. The iconic pecan trees and polo fields played a great role in Wersebe’s vision for this build. Wersebe is not an architect, but has always been a lover of architecture. Over a backyard barbecue with his neighbor Shannon Galway, the idea for a residential development was born. Wersebe’s philosophy was to build a home that he would enjoy living in. Many of the elements were inspired by Scandinavian design, and the ultimate concept was for the home to be a livable piece of art. After travel and research, the team decided that the development would focus on the natural beauty of the land, and the residences would be designed using natural materials that complemented the scenic surroundings. Wersebe believes this idea, along with the individuality of each subsequent house, is what sets this development apart from the many other rapidly-growing developments in Fulshear. The Fulshear House is just the first of many exquisite homes to be built on this land, and no two will be exactly the same. Wersebe knew the financial and time investment on this project would be great, so inviting engineer Shannon Galway and builder Santiago Macedo to become partners in the development is what made the venture possible. He considers this the smartest decision he made throughout the entire process, because everyone has a stake in the project from the beginning, and there was a strong desire to overcome the many obstacles that arose throughout the complex design and build. The plans for the home itself were radical and ambitious. Each aspect of the home was carefully created and designed for both appearance and use. Due to the grand nature of the project, there were several hurdles that the team encountered during construction. From challenges with the concrete foundation to structural difficulties with the bridge and garage hangar due to weight, to HVAC issues with such an open-concept home, the crew was put to the test over and over again. Pausing, collaborating, and reworking plans became a common theme. Galway mentioned that planning everything out perfectly would have been ideal, but sometimes that is not realistic. In spite of these complications, the integrity of the design was never compromised. The plan going forward will be to have as much of the design planned on paper as possible before construction begins. The team learned a great deal as they moved forward on this project, and they will take their new knowledge with them into the plans for the remainder of the development. According to Galway, this type of home, let alone this scale of a development, is groundbreaking for Fulshear, Texas. While the location itself is an asset, the unique design and use of non-standard materials make this project unmatched. The home is designed as a set of pods that can be seen as individual sectors, or one continuous house depending on the perspective from which it is viewed. This adds an interesting dimension and a distinctive appeal to the exterior view of the home. The exterior cladding of the house is Kebony wood, a sustainable and durable modified wood alternative. The wood requires little to no maintenance, and over time will develop into a beautiful silver-gray patina. This quality made it the perfect selection for a natural appearance that coordinates with its surroundings. Macedo explained that the Kebony cladding also complements the stone work on the house. The stone used for the project was sourced from a local quarry and then had to be custom cut on site to the exact dimensions , specifically for this project. One of the most fascinating things to note is that the entire home was actually built around the bridge connecting the master pod to the main pod. Designed by Galway, a structural engineer by trade, the bridge is composed of steel, glass, and wood, and was the first part of the home to be constructed after the pouring of the foundation. It is not connected to the house structurally. The steel used for the bridge and the other materials used in the home will expand and contract at different rates, so they act independently from one another. The bridge is fully functional, overlooking a natural pond.

The Fulshear House boasts many other extraordinary features, foremost being the hydraulic power lift 4-car garage door that hinges up in one solid piece like an airplane hangar door. Another is what has come to be known as the “Polo Perch”- a deck on top of the roof with a view of the polo fields. The polo perch and deck adjacent to the pond also feature Kebony wood. These small details are what make the Fulshear House interesting and unique. Now, Wersebe is looking for the right buyer for this gorgeous home. When attempting to sell a 3-4 million-dollar home, the pool of buyers becomes limited. The ideal buyer is someone who identifies with the financially prosperous polo subculture in Fulshear. This is the reasoning behind the decision to sell the home as a shell. The exterior of the home is fully designed and finished, but the interior remains purposely unfinished. Wersebe hopes that the right buyer will see the home as a blank canvas, and have a vision on how to finish it. In addition to selling the first home, the future is bright for this up-and-coming development. The next home on the property will likely be a country farmhouse-style home, still designed with the organic and modern feel of the Fulshear house. Wersebe said Kebony wood will be incorporated throughout the development to achieve this. In order to preserve the integrity of the equestrian area, there will be green space that is preserved for horses. Therefore, neighboring homes in the development will not be built closely to one another. The focus will continue to be on building high-end homes that reflect the natural surrounding environment, rather than trying to build a certain number of homes. Wersebe plans to develop 210 acres of what once was an 1,800-acre ranch before the land was divided among family members. Taking on this project was quite a risk, but it is safe to say the risk was well worth the reward. The final outcome of the Fulshear House is simply stunning, and the team is eager and ready to expand.