“To build anything that’s worth talking about… that’s what I’m most proud of.” 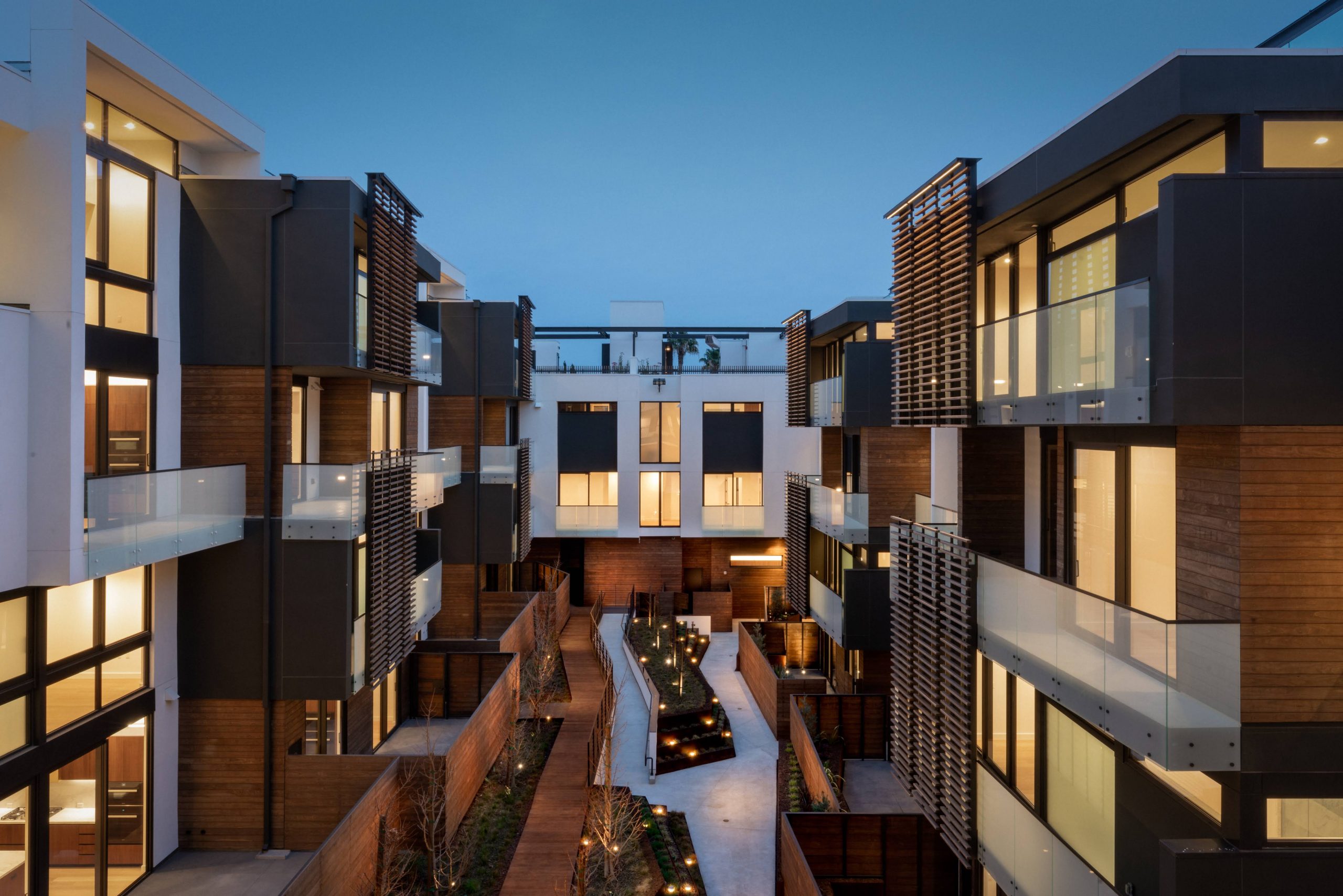 The Harland is a new development of luxury condominiums in the prominent neighborhood of West Hollywood, California. Featuring Kebony wood in a privacy and design-focused way, this modernist structure is iconic and unique in its architecture and design. 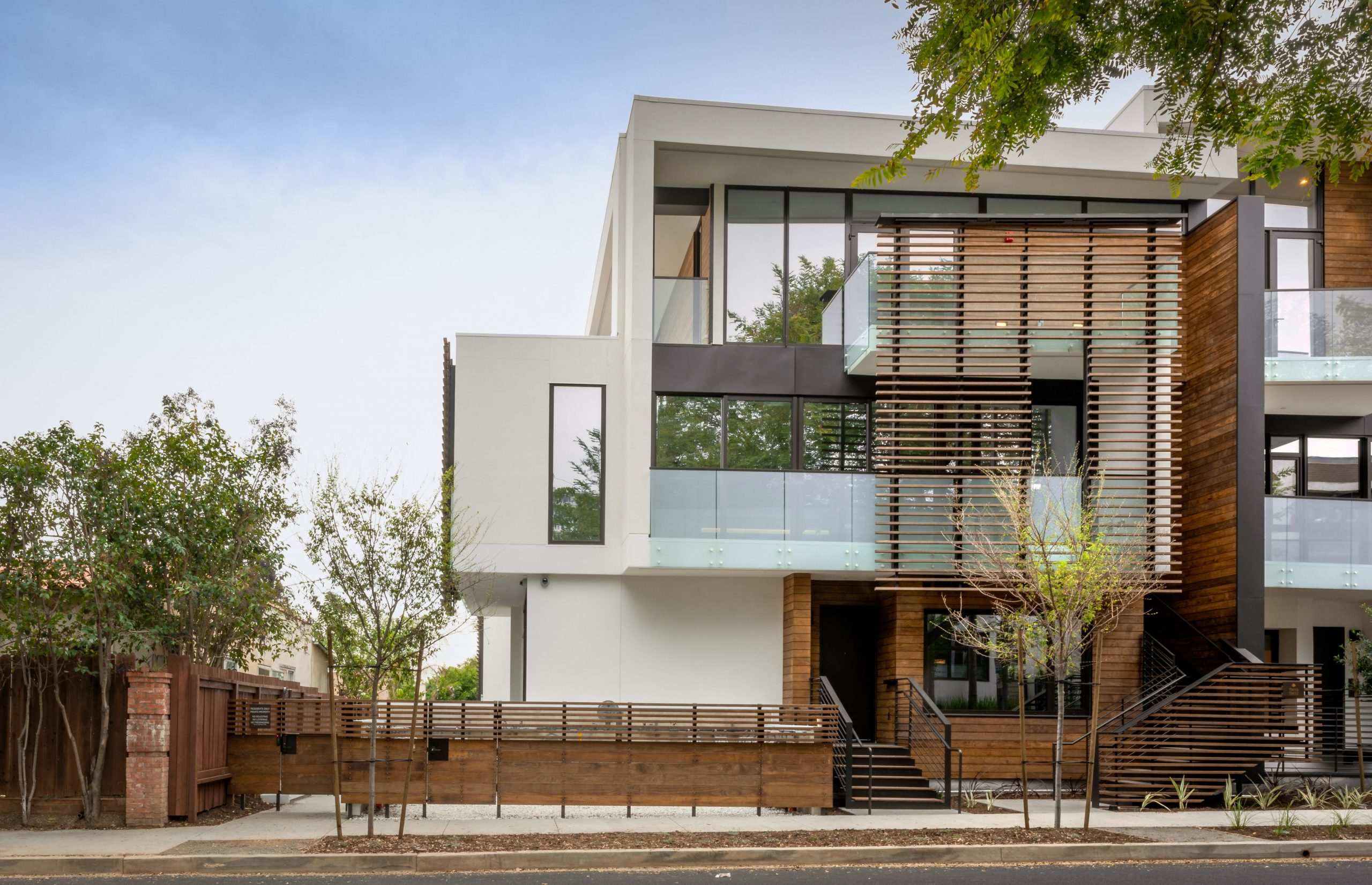 Long before it was the site of the newly-developed Harland West Hollywood, the land that houses the foundation of this project was home to a neighborhood of small cottages. These homes were demolished in the 1980’s, leaving behind a large empty lot. Over the years, it has become known to the West Hollywood community as Mr. Bones Pumpkin Patch and the prime location for Christmas Trees during the holiday season.

Several potential projects have been proposed for this piece of land, but it took time for the right one to be presented. When Scott Walter joined the OFFICE UNTITLED team, the Harland West Hollywood project was already in the works. The development was to be visually dynamic, warm, and environmentally friendly, given that West Hollywood is under a Green Building Requirement. The goal was always to create something that gave back to the city, and to present something with an elite level of craft.

“It’s an iterative process getting to a work of architecture.” 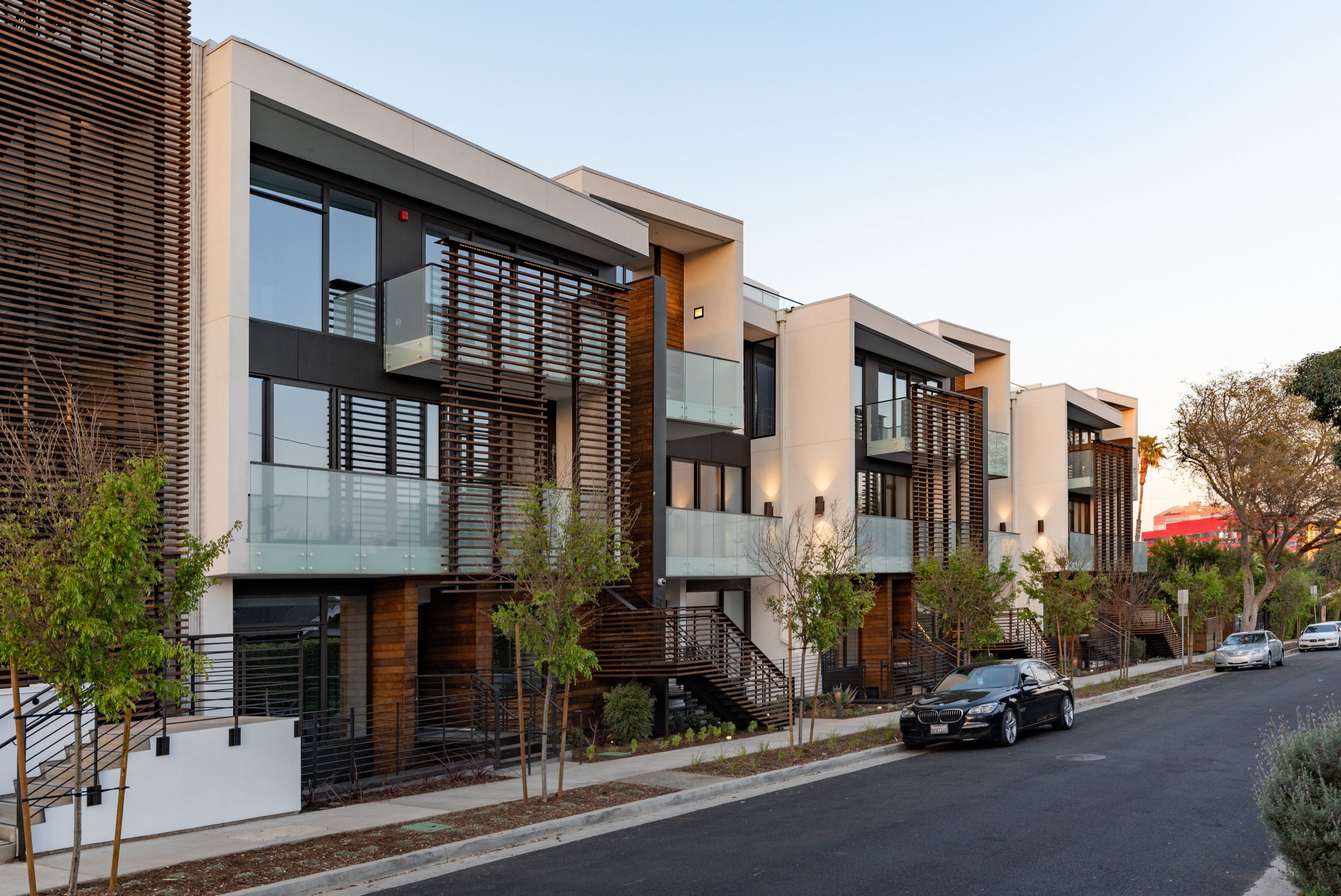 The first item on the team’s agenda prior to the groundbreaking of the development was community outreach. West Hollywood is a small community, and seeking neighborhood approval and being sensitive to their concerns was a priority. Some neighbors were unsure about how the entrance to the development would affect traffic on side streets, but they were assured that the project would not interfere with ease of access. In addition, the structure was designed as a low rise rather than a high rise, and it offered the potential for a stunning street view. Once this first valuable step was taken, it was time to move forward.

Before The Harland’s groundbreaking, the design for the project was not fully developed. There was a clear vision, but the time eventually came to consider specific details regarding implementation. In 2016, the team requested the service of MATT construction. Senior Project Manager Dan Condreay explained how the client, architect, and builder worked closely together from the start. He described the relationship as a balancing act, where the client and architect dreamed up the ideas for the project and the builder brainstormed how to make the vision functional while remaining within budget. The team considers this one of the most important steps in the process, because it kept the plan realistic throughout the entire build and allowed each stakeholder to understand the end goal. This partnership could not have been successful without trust and constant communication, and collaboration was a common theme. Walter mentioned that listening is key, as all ideas have merit. 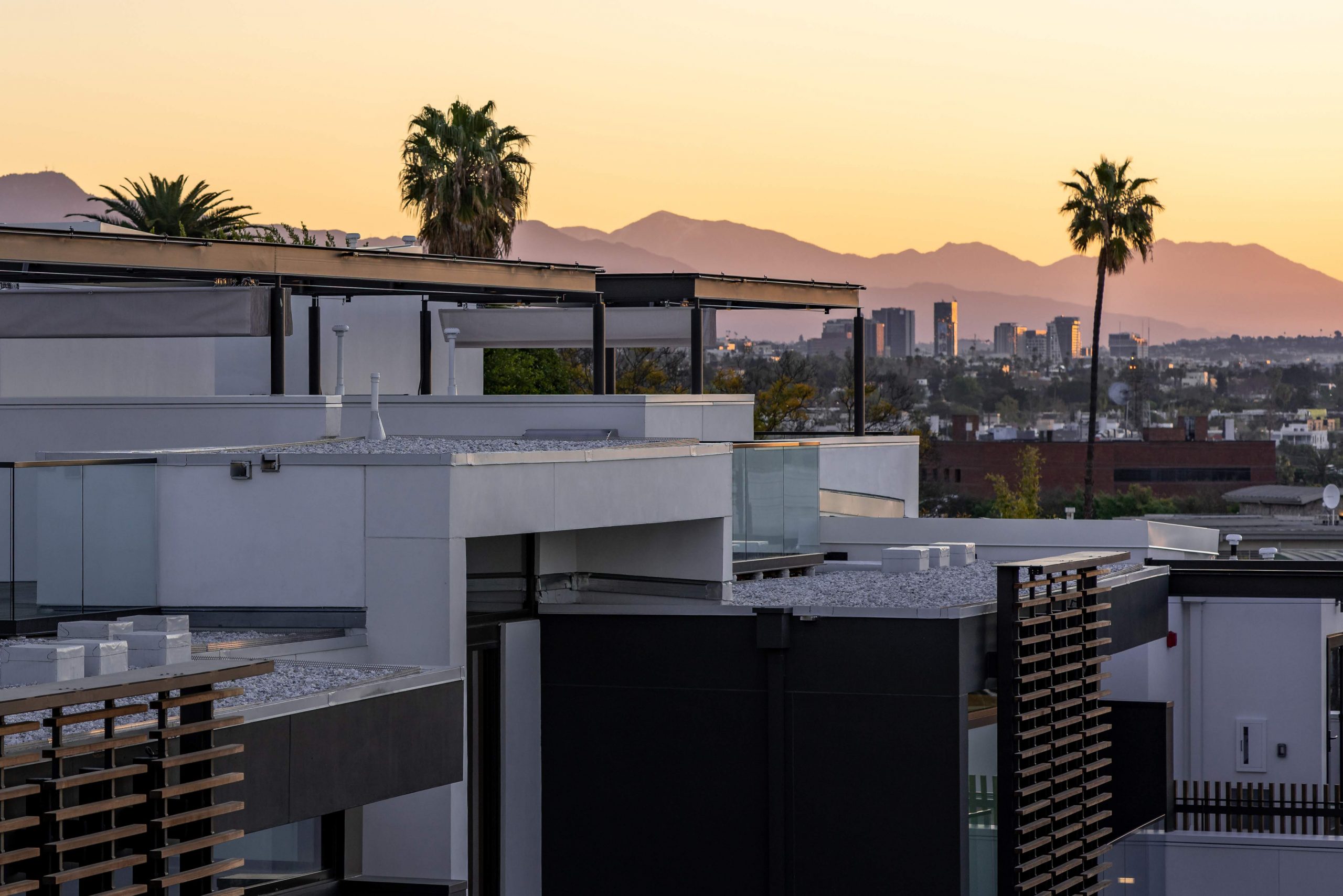 Another obstacle was the height restraint faced by the team. OFFICE UNTITLED developed a plan for a sunken central courtyard that would allow the complex to include an additional story while maintaining its lowrise promise. The street side of the building is three stories high, while the courtyard level is four stories, with a parking garage underneath the entire complex. This mass excavation provided 50-60,000 additional square feet for the structure in the form of a below-street level floor of units. While the team was met with structural challenges throughout the build, the fluid communication, innovative thinking, and high level of trust between them allowed for resolutions that supported the integrity of the design every time.

“We like to push the limits of technology. Not only from a construction standpoint, but from a safety standpoint.” 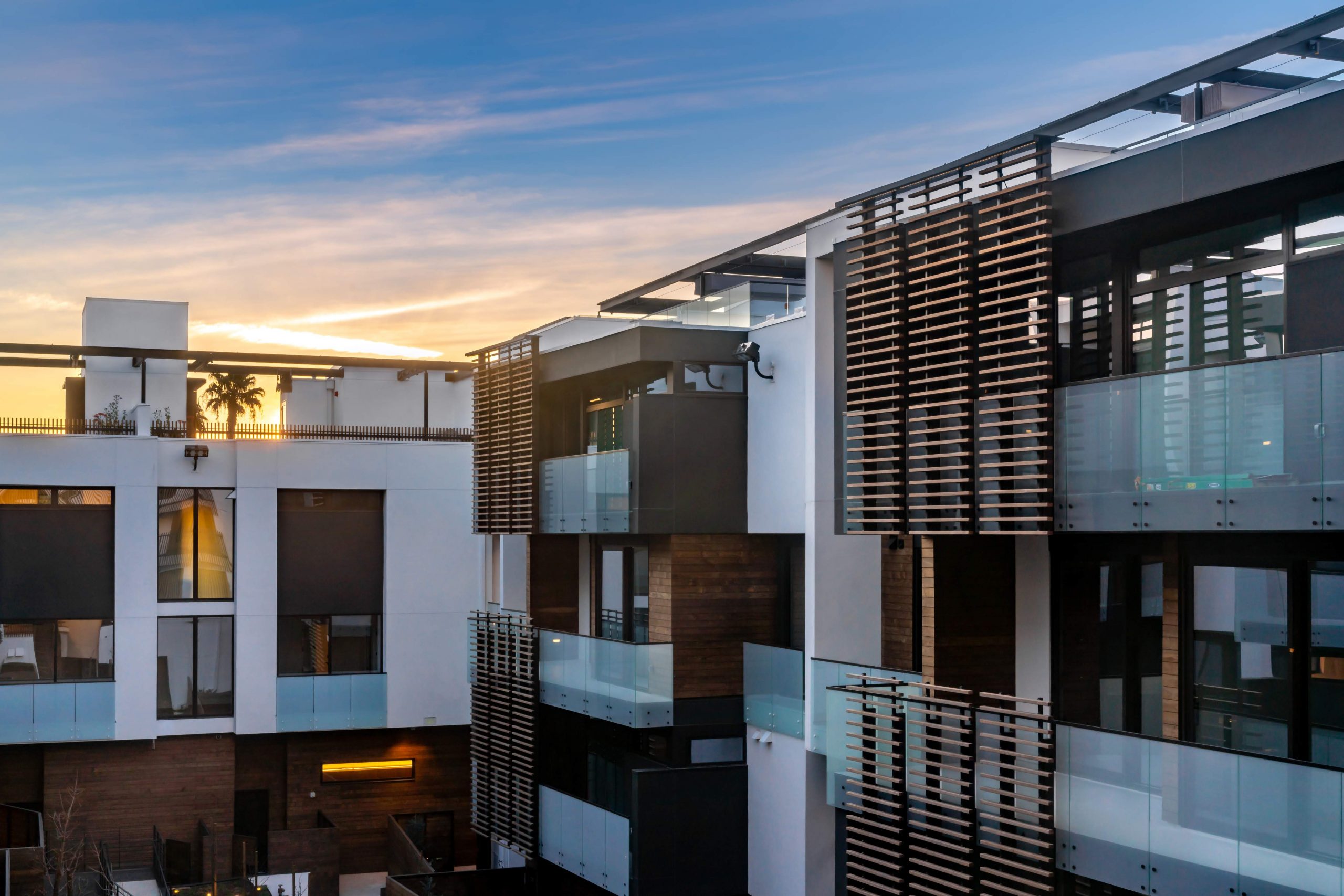 The Harland stands out for many reasons, one of which being that each unit in the development has its own distinctive design, dimensions, and vantage points. No two units are identical. This provides a dynamic, neighborly, and exciting street view for drivers and passersby.

Another defining feature is the wood accenting that is used throughout the development. The architect originally envisioned these elements using composite wood, but after negotiations and a contractor suggestion, Kebony clear modified wood was selected instead. Kebony wood is an FSC®-certified modified wood that chemically alters softwoods, giving them the properties of tropical hardwoods. The product not only matched the aesthetic vision of the architect and the client, but also aligned with the city’s Green Building Requirement. Walter described Kebony as being impeccably straight, durable, and easier to work with in comparison to Brazilian hardwoods. Knowing the building would not add to the climate’s destruction caused by deforestation made it the best fit for the project. 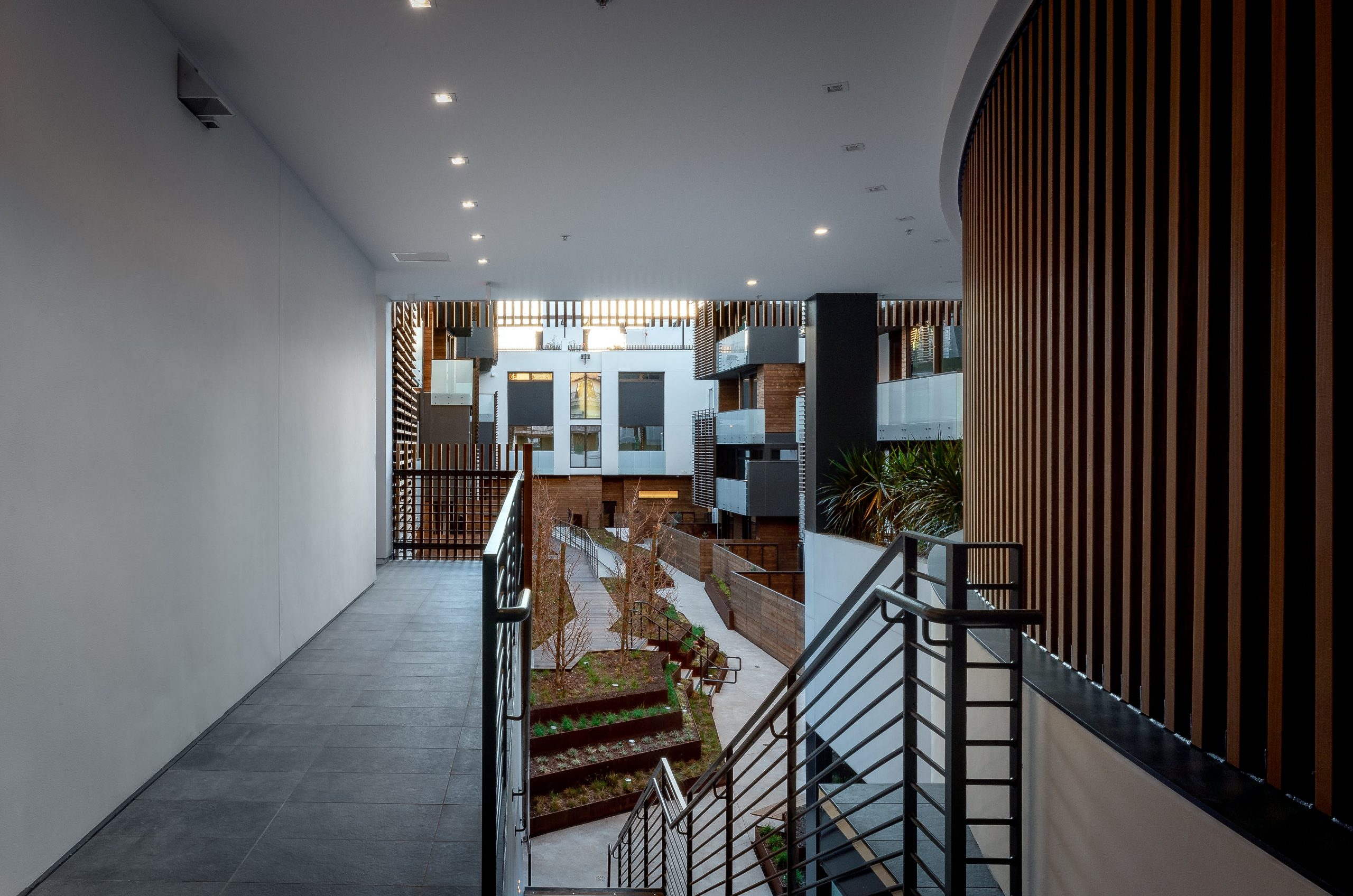 One of the elements featuring Kebony wood is the privacy screen surrounding the ramp into the parking garage. The screen is designed to look like a picket fence, which required some creativity with the installation. Cast-in-place concrete was melded to a steel plate to create a radius around the area for the screen. Clips were then created to attach the wood slats at the top and bottom. The parking garage itself is a highlight, as residents can ride one of 9 elevators directly up to the private entrance of their unit. This luxury provides the feel of living in a truly private residence.

The Harland provides exactly the level of privacy or socialization preferred by the residents. The glass guardrails surrounding the balconies are opaque on the ground level, and become increasingly transparent on the higher levels. The varying levels of grade on either side of the building also keep residents from being able to see directly into a unit across the courtyard. In addition, staircases and elevators that lead to the street are shared by no more than two units, so it feels very private even when entering and exiting the units. Socialization and community are still highly attainable for tenants when they spend time in the sunken central courtyard of the building or while using the community amenities: including a media viewing room, exercise room, catering-style kitchen, and bowling alley.

Currently, The Harland West Hollywood is selling units to its future residents. It is safe to say the project exceeded its design expectations, and the relationships among the members of the design and build teams are a significant part of this success. This development is a particular feat for OFFICE UNTITLED, as it is the first large scale project they have worked on from start to finish- and has contributed to them winning bids on many other iconic projects. As Walter mentioned, The Harland is a true testament to what is possible when you think outside the box. 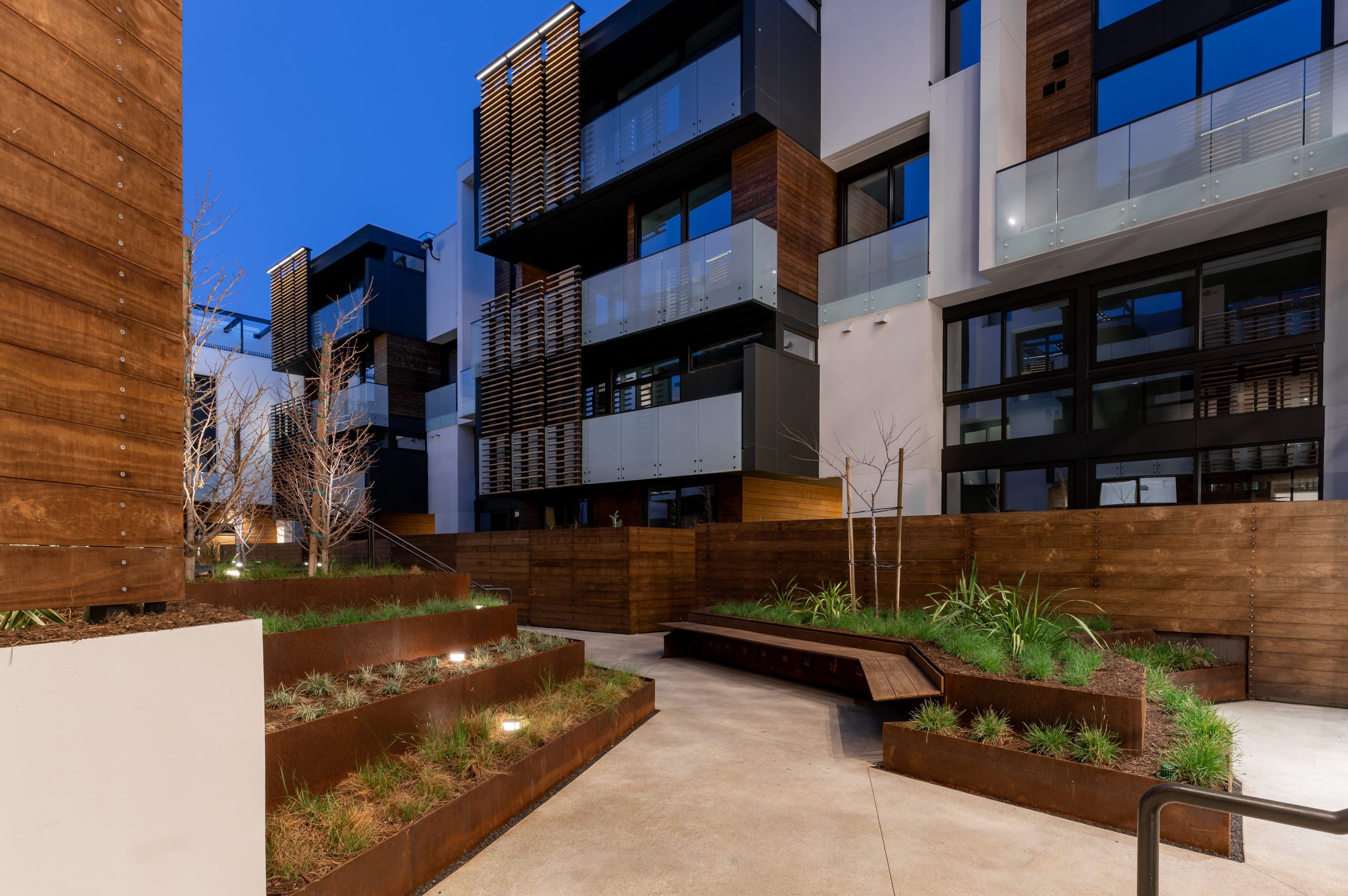