The Minne Stuga: Designing a Place to Disconnect

“With this cool little open area, we could create a beautiful thing- something that we loved, where people could go and make their own memories.”
– Melissa Coleman, Owner and Designer of The Minne Stuga 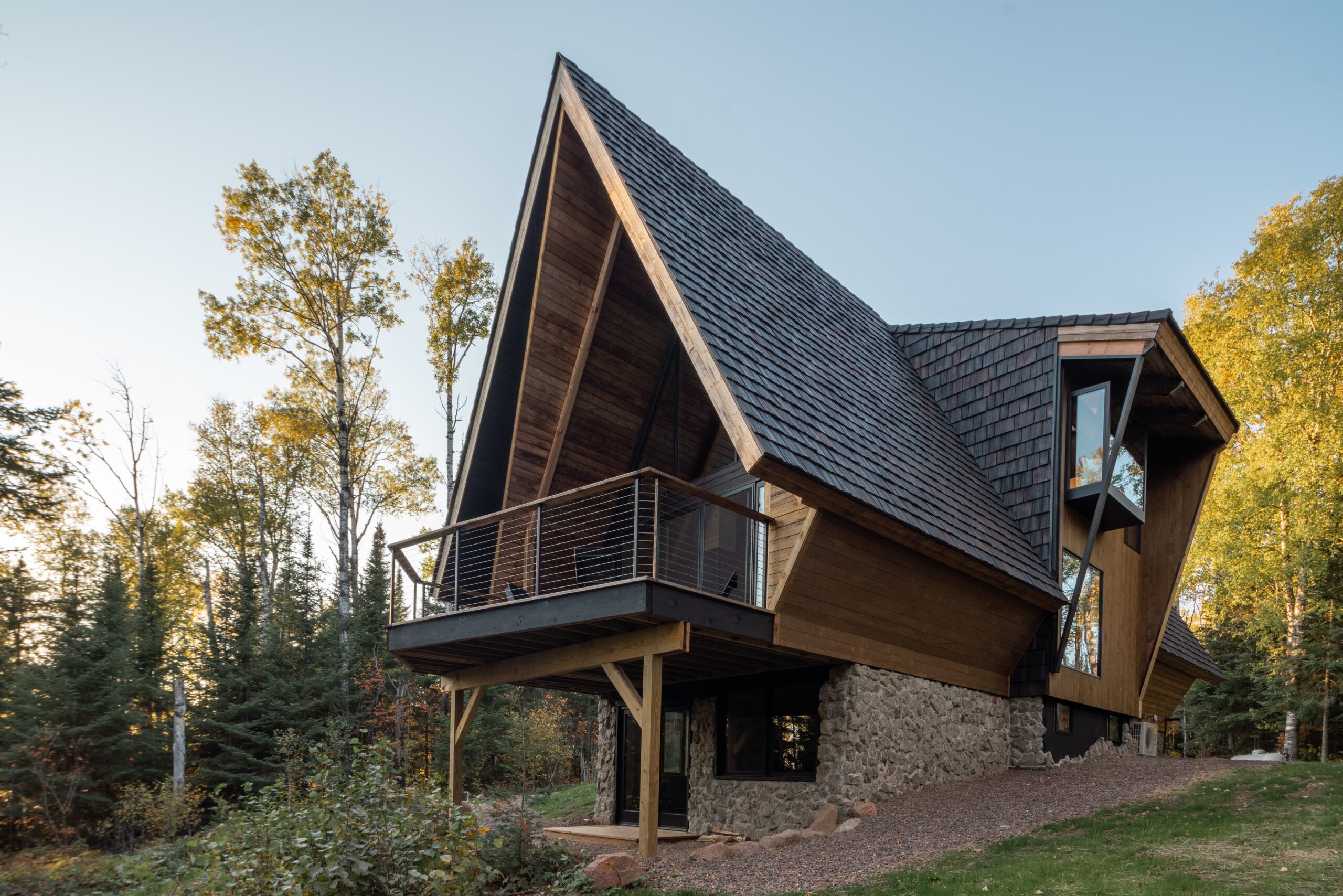 The Minne Stuga is a renovated a-frame cabin located in Grand Marais, MN.

Melissa Coleman describes herself as a creator. She is a designer by trade, but loves to make things using a variety of mediums. Her online presence began with her blog, The Faux Martha, where she originally baked and shared her recipes. She has since gained a significant Instagram following, and the content she shares there and on her blog has changed and evolved as she has changed and evolved. Along with sharing her recipes, Melissa has shared several home design projects and glimpses into her family life with her followers over the years. 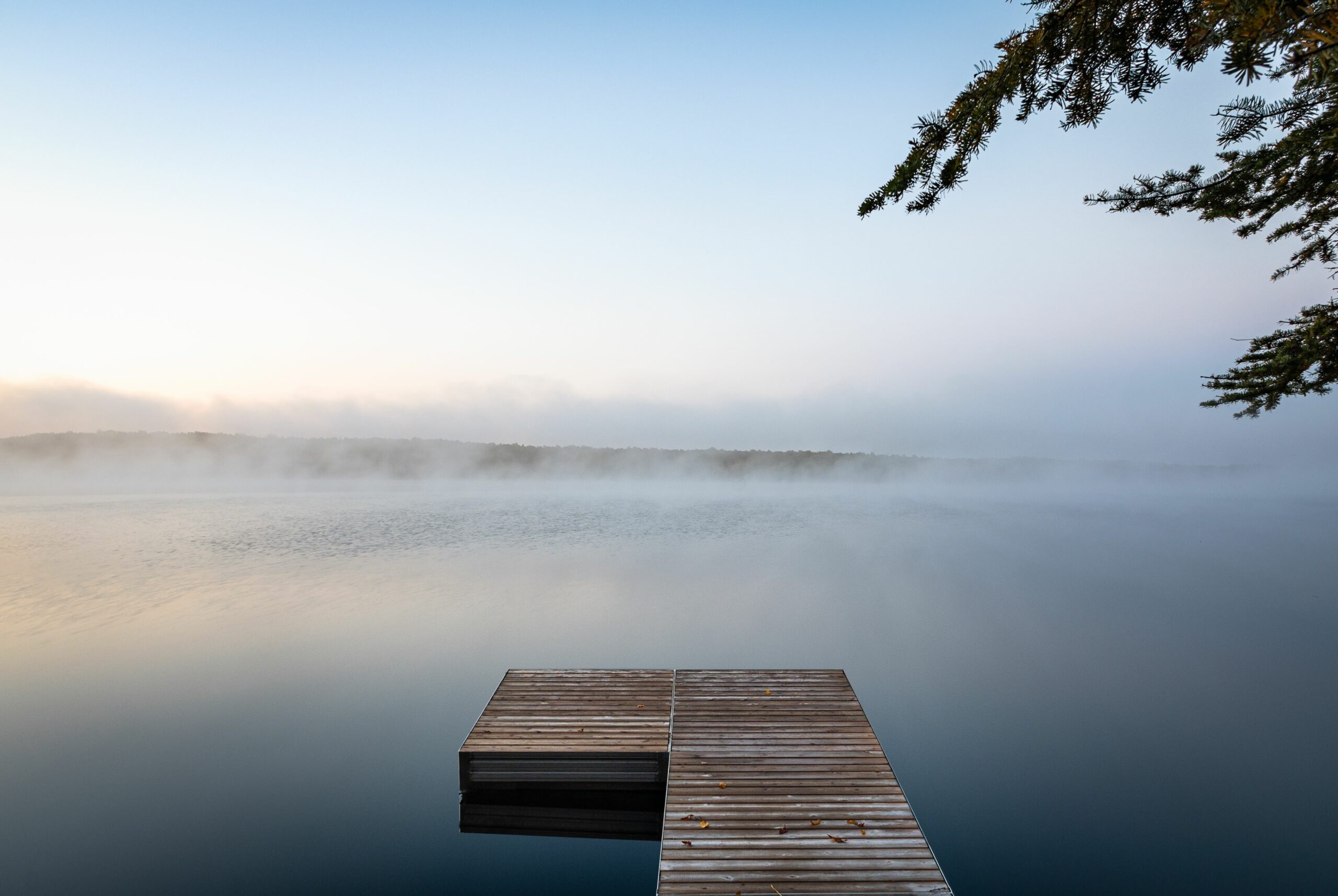 Beautiful lake views can be experienced from the cabin.

As Melissa’s online presence grew, she realized she needed to continue sharing authentically and personally while also keeping some things private. In addition, she wanted to inspire others to find a place to disconnect and make their own memories through experiences, instead of just consuming the content she was sharing in her feed. This led to the idea of a cabin renovation project in the north woods of Minnesota.

“We wanted to preserve what was and put our spin on it.”
– Melissa Coleman 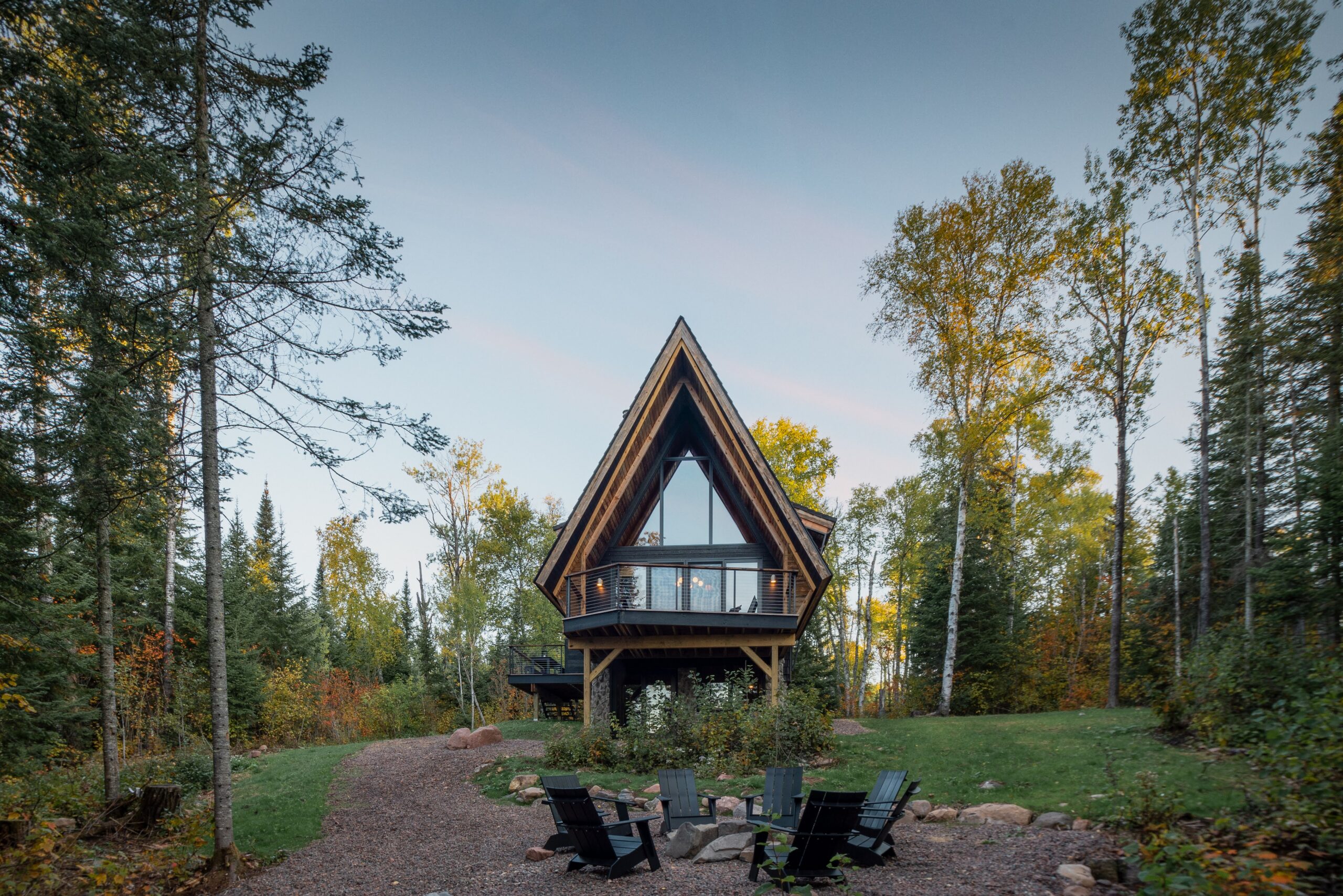 After over a year of searching for the right cabin, Melissa and her husband Kevin found the perfect project in Grand Marais, MN. The cabin was definitely an investment, but they saw its potential to be a place for their own family and other families to look up from their phones and connect with nature. The Minnesota north shore has always been a place to disconnect, and it is now especially desirable as more people are working remotely.

Guests at The Minne Stuga can connect with nature via windows placed throughout the home.

From a design perspective, Melissa envisioned a place where the existing and the new could coexist. The cabin had a unique shape and lots of character, which she knew she wanted to preserve while bringing it into the present. The existing cabin would be preserved and reinforced, making it more sustainable, efficient, and modern. Melissa called upon Anton Moody of Taiga Design + Build to help bring the cabin into the present. Anton is a long-time Grand Marais resident, and Taiga Design + Build is one of several local businesses that were involved in the renovation of the cabin.

“The bones were good[but]there were a lot of issues that needed to be addressed and cleaned up.”
– Anton Moody, Taiga Design + Build 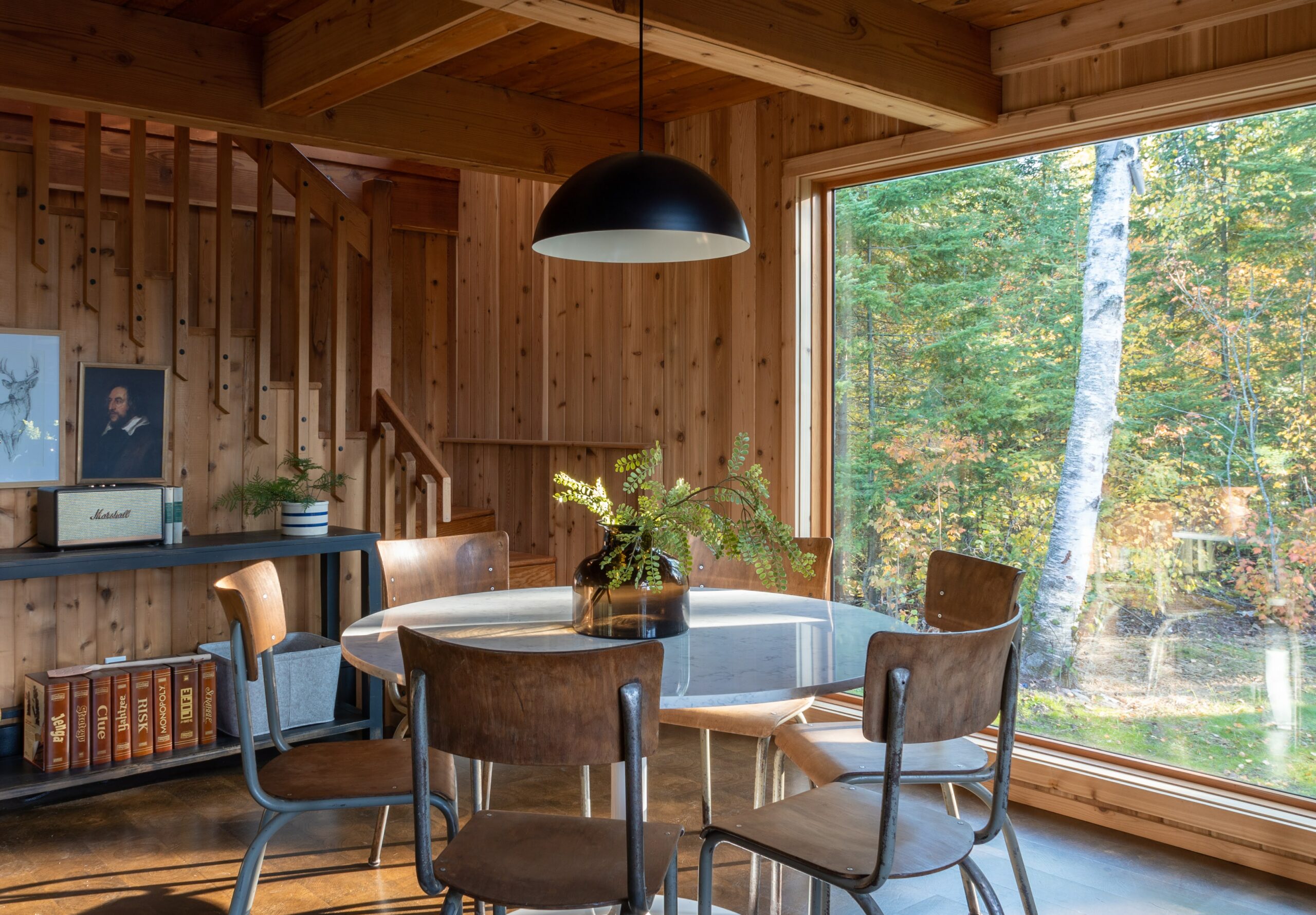 Wood panels removed during the renovation were repurposed in other parts of the cabin.

Anton could tell from the beginning of the project that the bones of the cabin were in perfect condition, but the exterior needed lots of updates. The roof was constructed of beautiful, 50-year-old cedar, but it was rotting and letting water into the home. There were many existing windows that provided connection to the cabin’s surroundings, but they were not structurally sound and needed to be replaced. The deck was also rotting, and some parts of the siding needed to be updated. On the interior, the original home had green and orange carpet throughout. Melissa knew making these changes would involve lots of work, but she saw the beauty in the cabin and envisioned what it could be.

Melissa and Anton went back and forth for a while with massing drawings. They explained that it can be challenging sometimes when two artists are working together, because they see things differently. In addition, ensuring all the updates remained within budget was difficult. Ultimately, Melissa and Anton merged their styles to create a unique and stunning design plan for the cabin.

“We’re still feeling the effects of [the pandemic] not only with pricing, but with availability.”
– Anton Moody 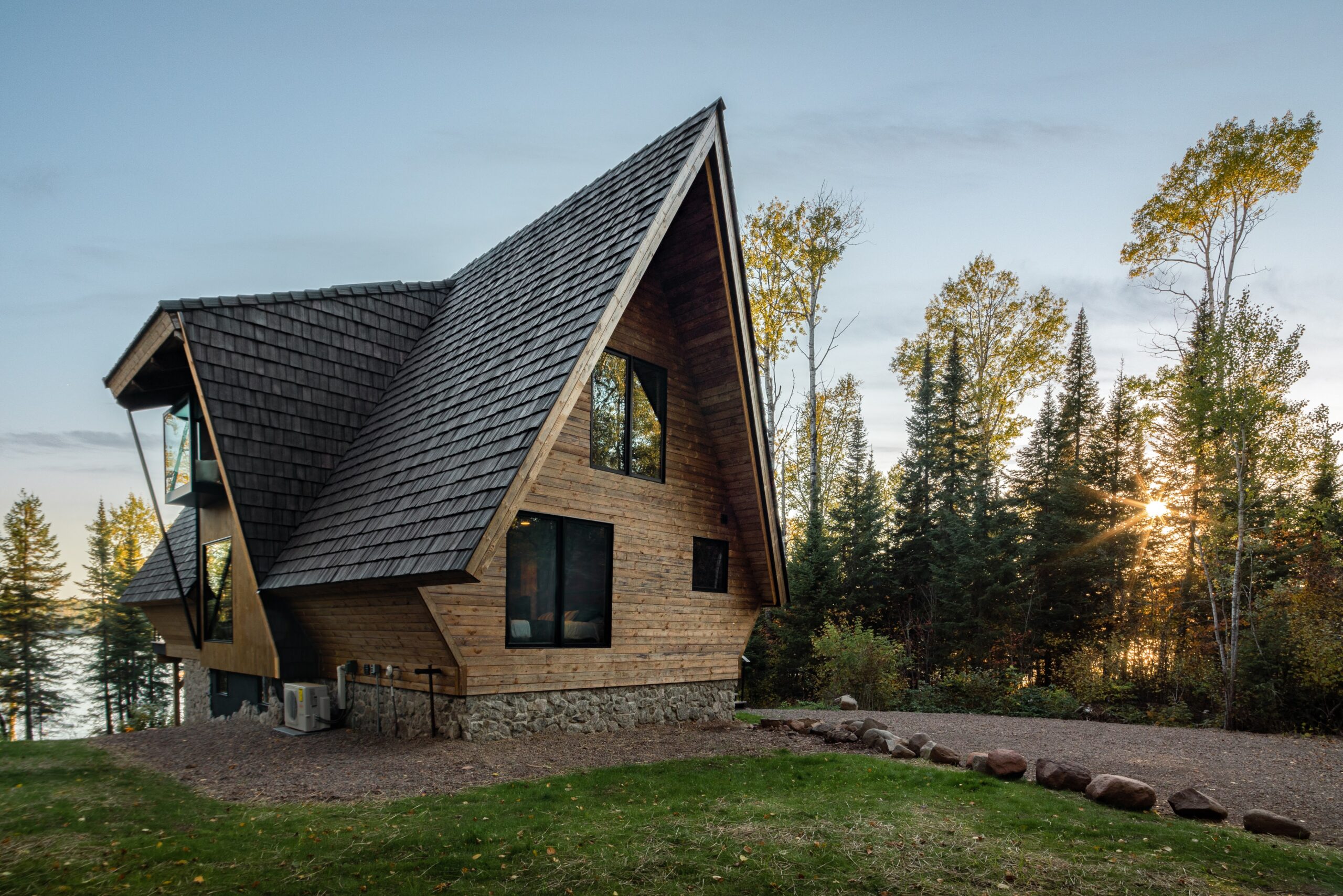 An asymmetrical roof is a unique design feature of The Minne Stuga.

Just as plans were finalized and construction was about to begin, the arrival of the COVID-19 pandemic halted their progress. The quarantine required Melissa to help teach her daughter who was now in online school, and her husband was working from home. Supply chain issues made it incredibly difficult for those like Anton working in the construction industry to acquire the materials they needed, so the project was halted. While this was frustrating at the time, it made it even more exciting when construction finally did begin. They had waited for so long, and a dream was becoming reality after a very trying time worldwide.

“We wanted to choose a name for this cabin that honored where it was and the people who influenced where it exists.”
– Melissa Coleman 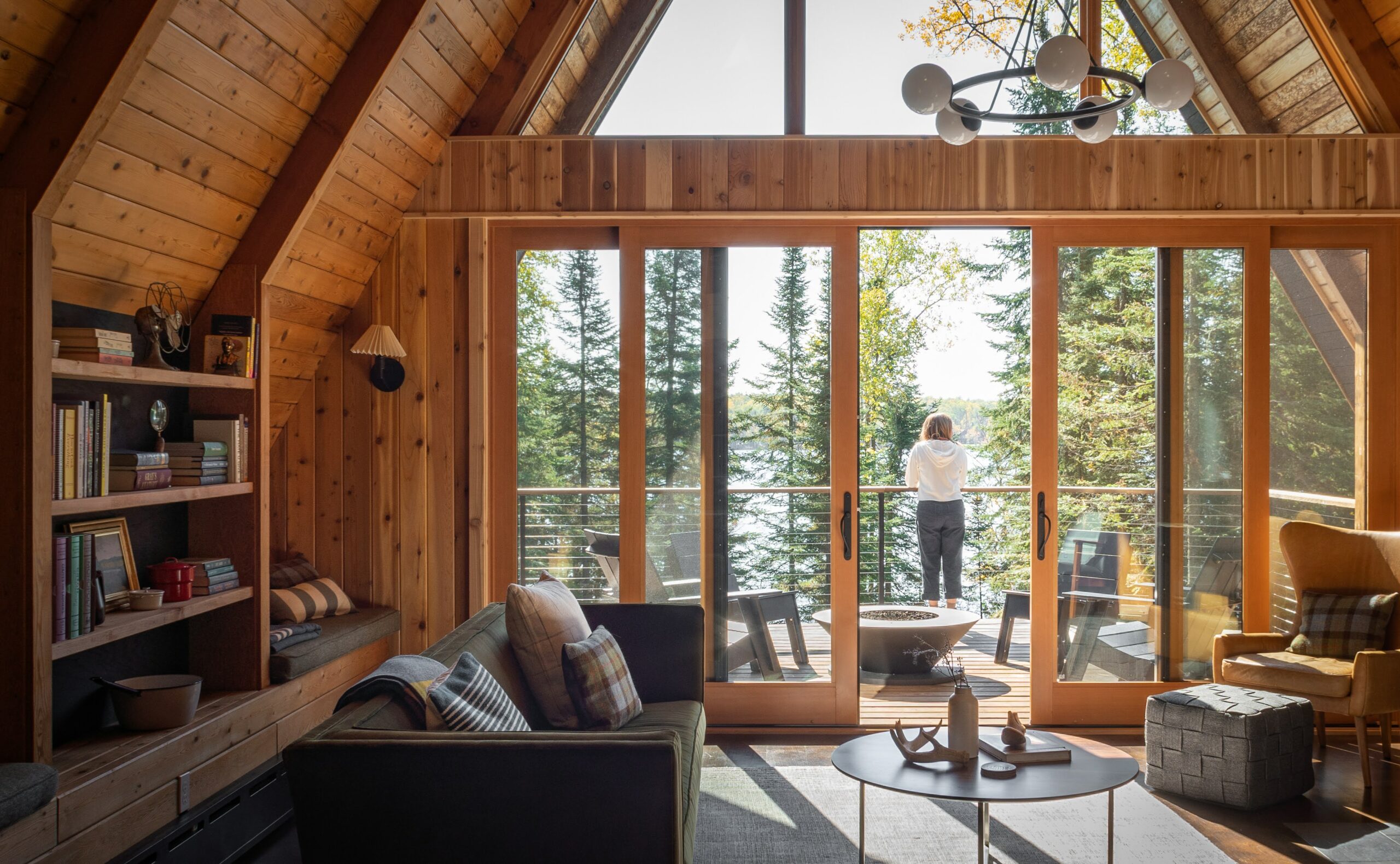 Modern within the home creates an interesting contrast between old and new.

Melissa selected The Minne Stuga to be the name of the cabin. “Minne” comes from “Minnesota” and means “by the water”. “Stuga” is the Swedish word for “cottage”. With its location near the water and the Nordic influence drawn for the design of the cabin, the name honors where the cabin exists and those who helped create it.

Blending the existing with the new was a priority for the design team, and one way this was achieved was through the interior cedar planks that form the walls. Each time an area of the house was disrupted for a structural update, the cedar was removed and relocated to a different area of the house where the cedar needed replacing. This balanced the old and the new, honored the existing materials, and kept the design team from having to replace all the cedar. 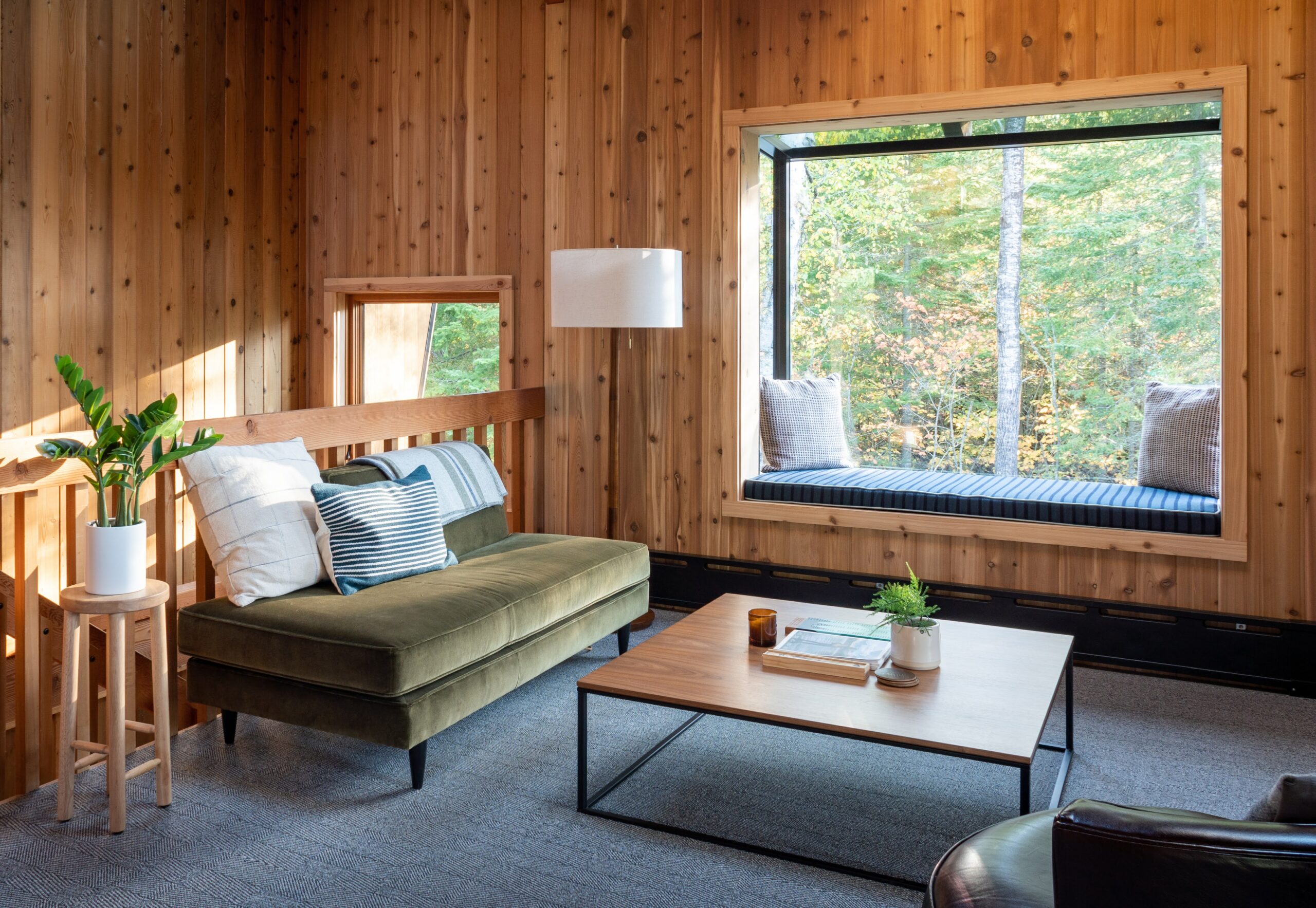 A window box on the side of the cabin doubles as a window seat, where guests can sit and enjoy the changing of the seasons.

One of the most exciting features of The Minne Stuga is the sit-in window box that extends out of the exterior of the home. Sitting inside this glass box allows for stunning views of the surroundings, and people can watch the animals, see the snow fall, and observe the changes of the seasons. This is one of the ways the outdoors are brought in at The Minne Stuga.

Every product and material chosen for The Minne Stuga was purposeful in regards to aesthetic and longevity. The team wanted to select materials that would look beautiful while also standing the test of time. This led to the selection of Kebony modified wood for the cladding and decking of the cabin. The natural look and feel of Kebony aligns with Melissa’s vision of blending the old with the new, and the durability of the product ensures the installation will remain functional for years to come.

“Every house should be designed for where exactly it’s going. With the combination of mine and Melissa’s ideas, I think it made this property that much more beautiful.”
– Anton Moody 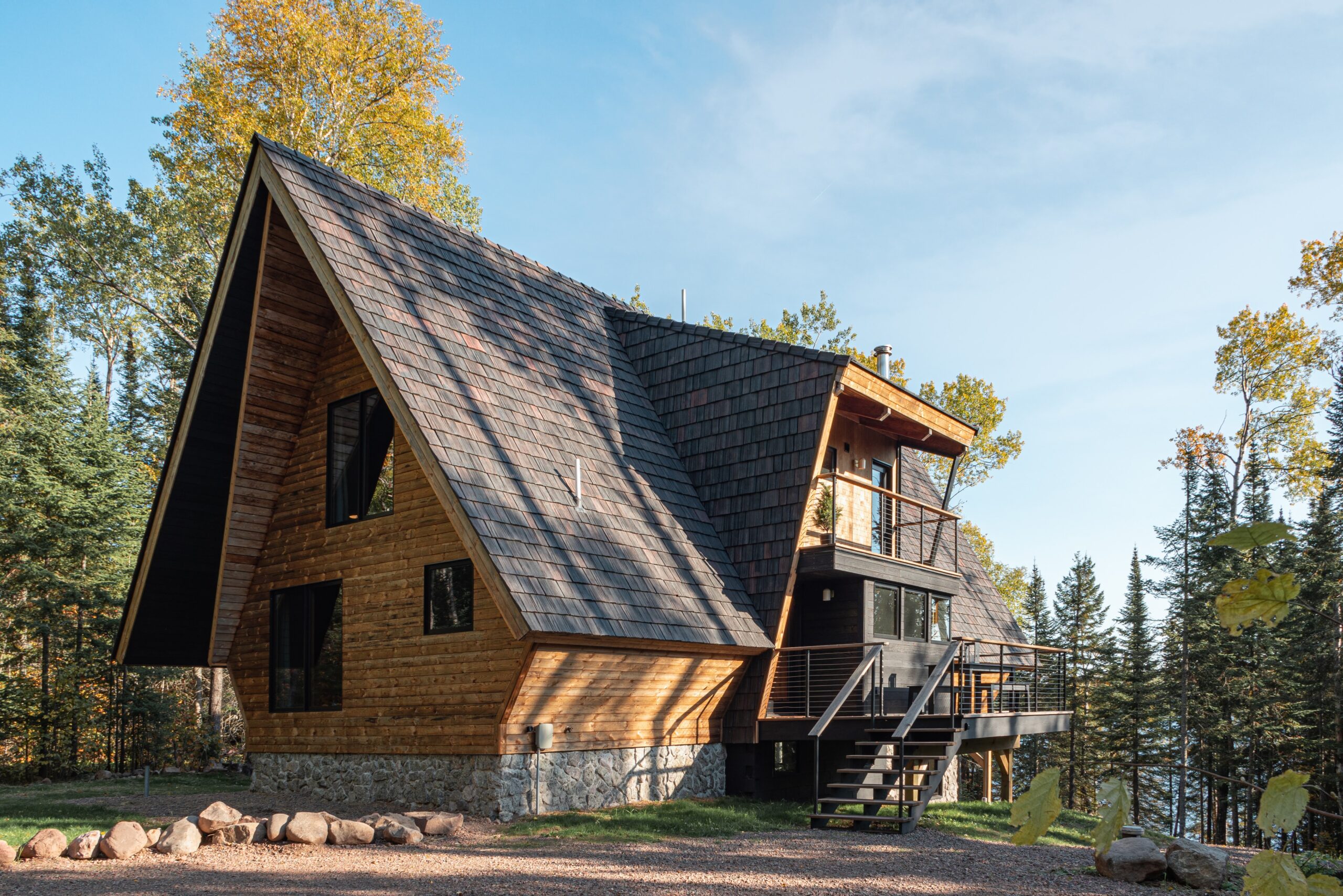 Melissa’s style is unique, and The Minne Stuga is the product of her interesting and beautiful ideas. The minimal aesthetic and layering in of warm pieces makes the cabin a place to experience something one-of-a-kind. The Minne Stuga has begun booking stays, and the feedback Melissa has received from guests has been wholly positive. These texts and handwritten notes have made the project feel completely worthwhile for her.

The design team set out to create a beautiful, quiet space that brought the outdoors in, and they achieved their goal. The Minne Stuga books stays a few times per year- follow Melissa @thefauxmartha and The Minne Stuga @theminnestuga on Instagram to see when the next bookings open!