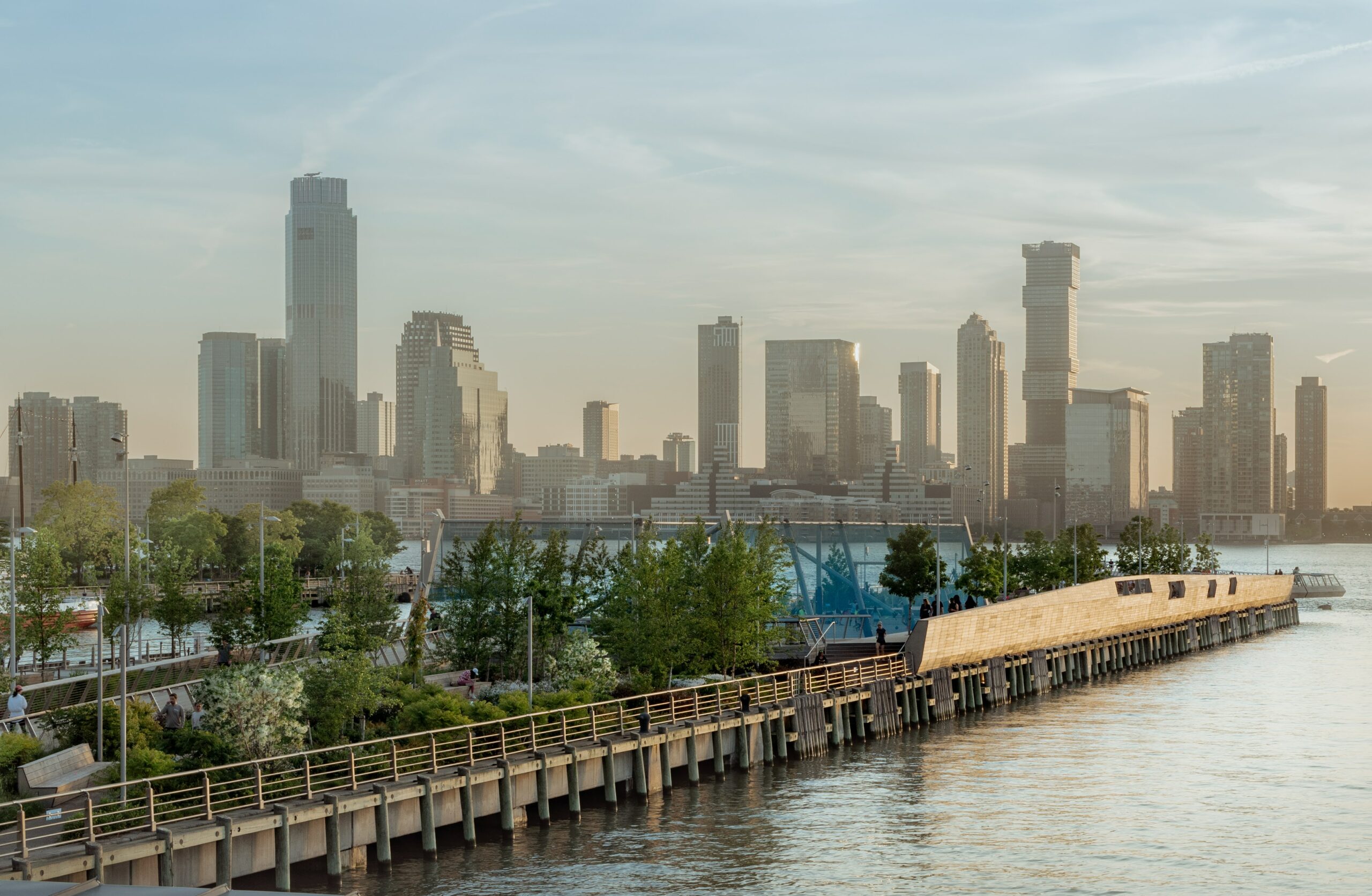 When thinking of New York City, the hundreds of miles of coastline surrounding the island of Manhattan may not be the first thing that comes to mind. However, these waterways are what made New York City powerful. Industry grew up first along the edges of the Hudson River, and the riverfront became inaccessible to the public as a result.

Beginning in the 1950’s, transportation of goods shifted from water to air transport, effectively abandoning the piers along the Hudson River. The unusable, decaying waterfront inspired the Hudson River Park Trust to revitalize these piers and create accessible outdoor spaces for the community. The updates began with the reconstruction of the West Side Highway into a promenade. The design of a bikeway followed, and soon a master plan of everything that would be on site at Hudson River Park was born.

The Vision for Pier 26

“You are submerged in messages of ecology and sustainability when you walk onto this pier.”
-Lucinda Sanders, CEO and Partner at OLIN What was once a collection of old shipping piers has been given new life with the opportunity to open up the Hudson River waterfront and provide space for active and passive recreation. Extensive plans are in place for the entire park, and Pier 26 is one part of this vision that has been successfully completed.

The ultimate goal for Hudson River Park’s Pier 26 was to provide a place of play and enjoyment for members of the community, as well as to learn about the ecology and celebrate the pier’s location in the Hudson River estuary. An estuary is where saltwater and freshwater meet and mix, creating a unique, biodiverse environment. The design of Pier 26 was centered around ways to educate locals about previous ecosystems that once covered Manhattan Island. Hudson River Park is committed to protecting this marine sanctuary and wanted the design of the pier to focus on sharing its magnificence with the community. 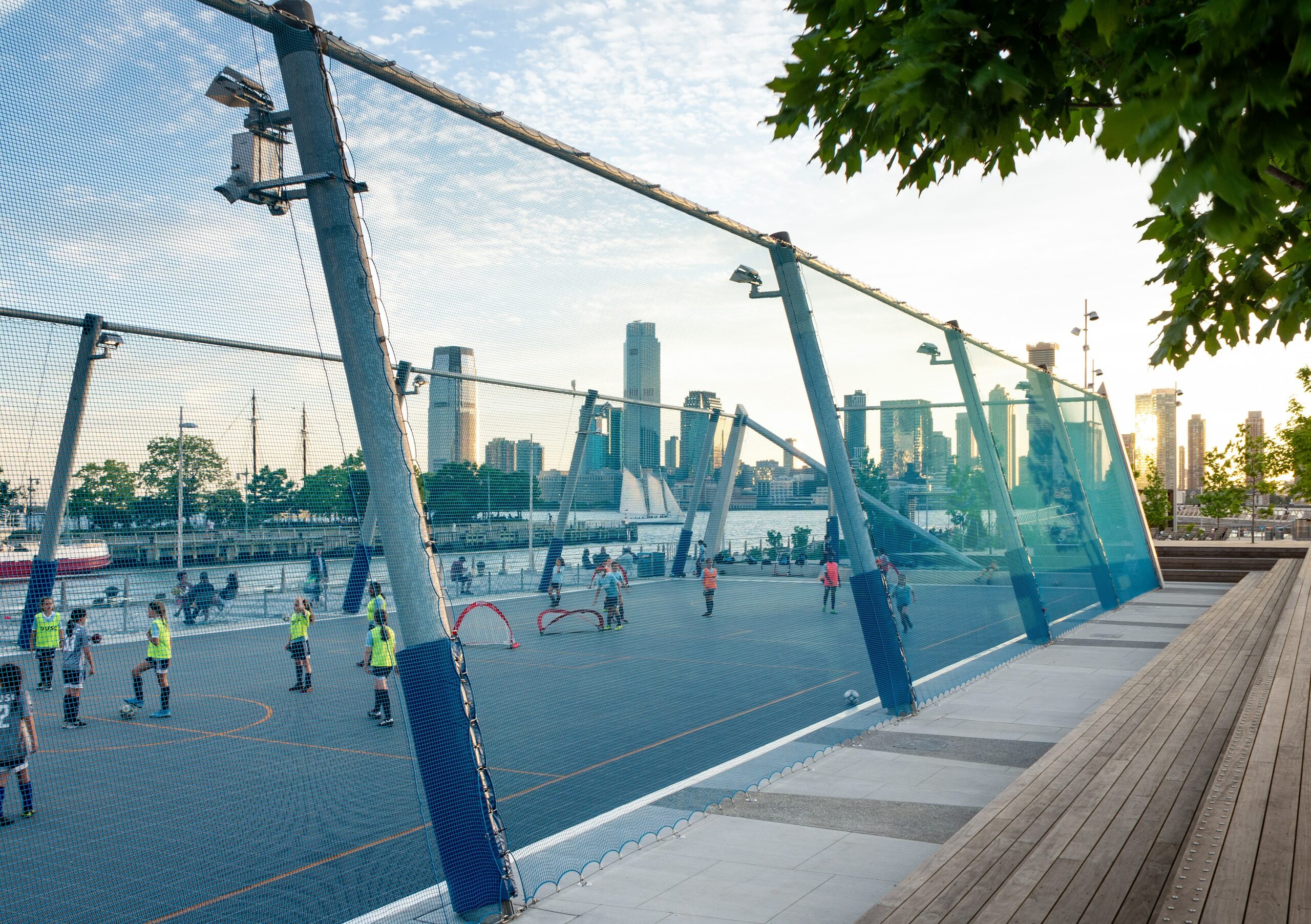 In addition to this educational piece, opportunities for socialization and recreation were at the heart of the plans for Pier 26. Members of the community were invited to share their ideas for what they hoped the space would become, which led to the design of a sunning lawn, sports courts, a multi-level deck, and an abundance of seating options all along the pier.

“You can go into a room with 100 people and come out with 150 opinions.”
-Matthew Washington, Former Deputy Borough President- Borough of Manhattan The Pier 26 design team worked intentionally to create dialogue between themselves and the members of the community. These conversations led to exciting ideas for the pier’s design, but it also proved to be challenging when so many different ideas emerged. Everyone had their own unique thoughts about what the space should be, and the design team wanted to incorporate a variety of them so that everyone could feel like they contributed and were heard. Lots of discussion and narrowing was required to reach the final consensus.

“Pier 26 was a wonderful challenge in a lot of ways, from constructing a wall that hung off the edge of a pier to the suspended lounge and swings that looked out onto the water. Everything was unique.”
– Michael Blum, President of Studio 431 at Landscape Forms 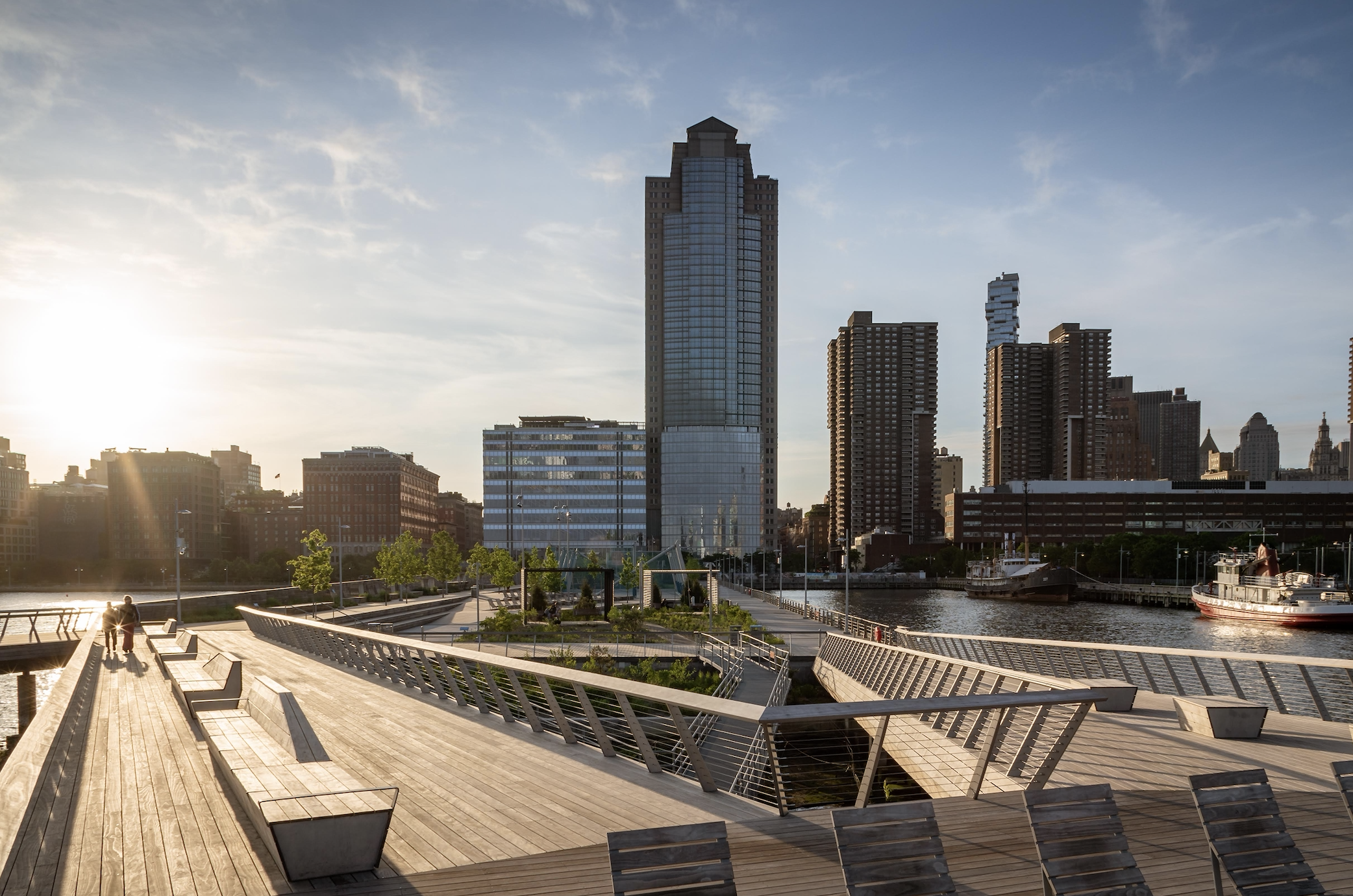 One of the most difficult challenges faced by the design team was the 300lb./sq.ft. weight restriction they were working with. The architects had to be very particular about what they used to support the concrete pier and settled on a fill of geofoam, soil, and lightweight aggregates. The fill was graded for the trees and other plants that would eventually be on the pier, and the geofoam depths in each area were determined by what would be above that space on the pier. For instance, a plant bed and a walkway have very different weight impacts, so the amount of geofoam beneath them had to be adjusted in coordination. The team also had to consider future growth of plants and trees, and how that growth would impact the weight of each area of the structure in the future.

Weight was also a factor in the construction of the wood wall that hangs off the edge of the pier. The 400-ft long wall is fully clad in Kebony wood on all sides, and a very specific process was used to place such a massive structure. The wall was constructed and installed in pieces, and each segment was welded together under wooden fins. This allowed for the appearance of one continuous wall due to the concealed fasteners. Another significant obstacle faced by the design team was the arrival of the COVID-19 pandemic. New York City shut down, and with most people being confined to their small apartments, there was a greater need than ever for outdoor space where people could engage in socially distant activities. The building of Pier 26 was deemed essential, and construction was able to continue so that this space could be provided. In spite of issues with suppliers and manufacturers during the pandemic, the team managed to bring the project in on time and on budget during a time when it was most needed. The wood architecture extending all the way from one end of Pier 26 to the other is a giant piece of furniture that allows for socialization in several capacities. OLIN is always looking for interesting ways to incorporate furniture into their design of public spaces, which resulted in various places to sit along the pier, including a bar area and swings that overlook the water designed by Landscape Forms’ custom sector, Studio 431. The north side wall of the wood architecture is elevated to create a microclimate. This extends the usability of the pier in the fall and winter seasons.

“The plants used on Pier 26 were all native to this area at one time…that was one of the major goals of the design team.”
-Jonathan Holden, Vice President of Steven Dubner Landscaping Pier 26 was designed with ecology in mind, allowing visitors to experience different shoreline habitats similar to what the native coastline of New York City once was. As people walk from East to West down the pier, they encounter a woodland forest, grasslands, maritime scrub, and end their walk at The Tide Deck with coastal marshes. The Tide Deck is a human-engineered marshland that meets a rocky intertidal zone. Rocks for the area were individually selected from a quarry and placed by a crane in the exactly-desired places. Tide pools were formed by digging out holes in the rocks so plants and animals could take root. The marshland acts as a field lab where people can come and learn about the biodiversity that exists where they live.

“We’re making sure that everything we put in place will stay in place and be able to survive.”
-Tom Adams, Senior Project Manager of Design and Construction for Hudson River Park Trust When Pier 26 opened at Hudson River Park, people began coming and kept coming, reinforcing the importance of the space. The design team was focused from the beginning on building something that would last for many years to come. The use of Kebony for the wooden architecture was one way to ensure durability, as the modified wood will withstand the elements and the effects of wear in a highly-trafficked area long-term. Another way the team ensured longevity of the structure was by accounting for sea-level rise, flooding, and tree growth and allowing that to impact their planning. Every design and material decision was made with consideration of the future. Due to this consciousness, Pier 26 and all of Hudson River Park have many wonderful years of service to the community ahead.